A Court in the capital Baku has convicted 33-year-old Shia Muslim theologian and prisoner of conscience Taleh Bagirov for having micro-discs of the Koran and religious music in his prison cell. It added two and a half months to his existing 20-year prison term. Bagirov called the new sentence "biased and politically motivated". 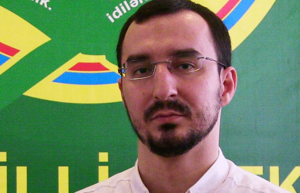 Taleh Bagirov
Voice of America
Bagirov leads the Muslim Unity Movement, launched in 2015. The authorities quickly began to try to suppress the new Movement, which has both religious and political goals and aims to unify the Islamic and secular opposition to the regime of President Ilham Aliyev. Dozens of its supporters have been arrested, most prominently in November 2015 when armed officers stormed a home in the village of Nardaran near Baku when Bagirov was arrested. Dozens have been tortured and jailed on serious charges (see F18News 9 February 2017 http://www.forum18.org/archive.php?article_id=2254).

Immediately after the raid, Etibar Najafov, Chief Adviser on Multiculturalism, Ethnic and Religious Affairs in the Presidential Administration, told Forum 18 that "they've done wrong things – they violated established rules". But he struggled to explain what rules they had broken. Asked if the Muslim Unity Movement had killed or proposed killing anyone, he replied "No" (see F18News 1 December 2015 http://www.forum18.org/archive.php?article_id=2127).

The first Muslim known to have been convicted for leading prayers in a mosque after having gained theological education outside Azerbaijan (a punishment that only applies to Muslims) has lost his appeal at the Supreme Court. The 43-year-old Sardar Babayev from the southern town of Masalli is serving a three-year prison term. His lawyer is lodging a further case to the European Court of Human Rights in Strasbourg (see below).

One year after the Supreme Court exonerated them and six months after a Baku court ordered them to be paid compensation for their unjust imprisonment, two female Jehovah's Witnesses have still not received the compensation. Irina Zakharchenko and Valida Jabrayilova endured nearly one year's imprisonment and convictions to punish them for offering one religious book to a resident near their homes in Baku (see below).

Shia Muslim theologian and prisoner of conscience Taleh Kamil oglu Bagirov (also known as Bagirzade, born 23 June 1984) was convicted in Baku of having in his prison cell micro-data cards with the text and audio recordings of the Koran and commentaries on it and religious music, as well as news reports on the criminal prosecution of opposition activists. He denied any wrongdoing, both during the investigation and in court.

On 13 February, on the final day of the trial, Judge Rufan Mursalov of Baku's Qaradag District Court found Bagirov guilty of violating Criminal Code Article 317-2.1. This punishes "Preparation, storage, transportation, handling or use of objects prohibited to persons detained in prisons or in detention facilities" with a prison term of up to six months.

Judge Mursalov sentenced Bagirov to a further prison term of five months, the local media reported. As Bagirov had 17 years, 9 months and 13 days left to serve of his 20-year prison term, the Judge rounded the combined new sentence to a further 18 years' imprisonment, his lawyer Fariz Namazli said after the verdict was issued. This effectively adds two and a half months to Bagirov's prison term.

Bagirov's lawyer Namazli insists that many prisoners have such micro-discs. "Witnesses from among the prisoners confirmed that having memory cards in prison is a widespread phenomenon," Caucasian Knot quoted him as declaring, "and no one is punished for that."

Namazli said the defence would be appealing against Bagirov's extra sentence. Baku Appeal Court would hear any appeal.

Prosecutors launched the extra criminal case against Bagirov in late December 2017. Warders searched his cell in Qobustan strict regime prison on 31 July 2017, two days after his arrival there. According to investigators in the case, they found seven micro SD memory cards which they sent for "expert analysis". This concluded that the material on them - including the Koran and commentary on the Koran – was not banned.

At the initial hearing in the case on 26 January 2018, Qaradag District Court rejected Bagirov's suit to have the criminal case against him thrown out.

Following the trial, Bagirov was returned to Qobustan strict regime prison, where he has been held since July 2017. The prison address is:

Local human rights defenders, including Oqtay Gulaliyev of the Azerbaijan Without Political Prisoners group, point out that Imam Bagirov's second prosecution while already serving one sentence is a "repeat of history".

Imam Bagirov was given a two-year strict regime prison sentence in November 2013 on drugs charges his supporters insist were fabricated to punish him for his religious and political activity. His driver Anar Melikov was also jailed for 19 months in August 2013 (see F18News 7 November 2013 http://www.forum18.org/archive.php?article_id=1894). At a further trial in August 2014, a Baku court sentenced Bagirov to an extra four months' imprisonment for allegedly having an illegal mobile phone in his cell (see F18News 14 August 2014 http://www.forum18.org/archive.php?article_id=1985).

In November 2014, Baku's Qaradag District Court ordered Bagirov's transfer to a harsher prison regime. In December 2014, even before the decision had come into force, he was transferred from an ordinary regime camp to the harsher Qobustan Prison, along the coast to the south-west of Baku, where prisoners are held in isolation (see F18News 21 April 2015 http://www.forum18.org/archive.php?article_id=2057).

Bagirov was among many Muslims arrested during an armed raid on a home in Nardaran in November 2015 as they were holding Friday prayers. The first 18 – including Bagirov and the deputy head of the Muslim Unity Movement Abbas Huseynov – were sentenced at Baku's Serious Crimes Court on 25 January 2017. The charges – which the accused strongly disputed - included terrorism, an attempt to seize power violently, illegal firearms possession, and murder. Bagirov and Huseynov received the longest prison terms of 20 years each (see F18News 9 February 2017 http://www.forum18.org/archive.php?article_id=2254).

Bagirov was subjected to "severe torture" and a broken nose while in pre-trial detention at the Interior Ministry's Main Directorate for the Struggle with Organised Crime in December 2015 (see F18News 27 January 2016 http://www.forum18.org/archive.php?article_id=2143). The perpetrators have never been prosecuted.

Shia Muslim Imam Sardar Akif oglu Babayev (born 12 March 1974) has failed to overturn his three-year prison term handed down to punish him for leading prayers in a mosque having gained his religious education outside Azerbaijan.

On 13 February, a panel of Judges at the Supreme Court, presided over by Gular Rzayeva, rejected Babayev's cassation appeal, according to court records.

The Court rejected calls by both Imam Babayev and his lawyer Javad Javadov to dismiss the criminal case against him. The Court also rejected Javadov's suit for it to ask the Constitutional Court to rule on the legality of the Criminal Code Article used to punish Babayev.

Imam Babayev, who is married with three children, completed theological studies at Al Mustafa University in the Iranian city of Qom in 2000. He also studied Islam in Baku. At the invitation of the state-backed Muslim Board, Imam Babayev led the namaz (Friday prayers) at the Juma (Friday) Mosque in the southern town of Masalli from 2009.

However, Babayev received his education and preached before the legislation introduced such restrictions in December 2015.

Babayev's lawyer Javadov points out that Criminal Code Article 168-1.3.1 violates not only Article 48 of Azerbaijan's Constitution but Article 9 of the European Convention for the Protection of Human Rights and Fundamental Freedoms (ECHR), which guarantees the right to freedom of thought, conscience and religion.

"Domestic remedies are now exhausted," Javadov told Forum 18 from Baku on 14 February. He said he would be preparing a further application to the European Court of Human Rights (ECtHR) in Strasbourg about what he regards as an unjust punishment on Babayev for exercising his right to freedom of religion or belief.

Imam Babayev is being held in Baku's 17th prison camp. "He can pray there and have the Koran," his lawyer Javadov told Forum 18. The prison address:

Zakharchenko and Jabrayilova: Compensation for wrongful imprisonment not yet paid

Two Jehovah's Witnesses – 57-year-old Irina Zakharchenko and 40-year-old Valida Jabrayilova – have still not received compensation ordered by a Baku court in August 2017 for their nearly one-year imprisonment and convictions for offering one religious book to a resident near their homes in Baku.

"We will have to try to clarify why not at the court in the next days," Jehovah's Witnesses told Forum 18 from Baku on 9 February.

Zakharchenko and Jabrayilova were arrested in February 2015 to punish them for offering one religious book without the compulsory state permission. They were held by the then National Security Ministry (NSM) secret police as prisoners of conscience for ten months before they were transferred to an ordinary prison.

Jabrayilova later described the conditions in the then MSN prison. "She called her confinement room a 'cage', rather than a cell, in that there was no privacy and everything was exposed to the sight of others," Jehovah's Witnesses noted. "The smell of sewage in this 'cage' was suffocating."

Charges against the two were brought under Criminal Code Article 167-2.2.1. This punishes: "Production, sale and distribution of religious literature, religious items and other informational materials of religious nature with the aim of import, sale and distribution without appropriate authorisation" when conducted by an "organised group". Punishment is a fine of 7,000 to 9,000 Manats or imprisonment of two to five years.

The United Nations Working Group on Arbitrary Detention called in December 2015 for the two women to be freed and compensated. In January 2016 the two were convicted under Criminal Code Article 167-2.2.1 and given a large fine. At the same time the fine was waived and the women freed, but they were not compensated for their wrongful imprisonment as the Working Group had demanded (see F18News 29 January 2016 http://www.forum18.org/archive.php?article_id=2144). (END)