In 2017, officials of at least four state agencies have continued to raid and help punish individuals for exercising freedom of religion or belief. Alongside the police, State Security Service (SSS) secret police and State Committee for Work with Religious Organisations, a growing role in raids and prosecutions seems to be played by Religious Affairs Commissions attached to city or district administrations. 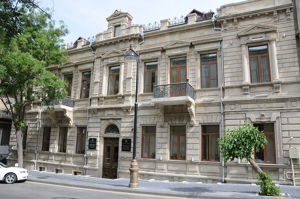 State Committee for Work with Religious Organisations, Baku
Cekli829/Wikimedia Commons [CC BY-SA 3.0]
Joint raids by officials of the State Committee, the SSS secret police and the Religious Affairs Commission attached to the administration of Baku's Binaqadi District saw leaders of two mosques fined in November for violating the country's strict controls on who is allowed to conduct religious activities and where (see below).

Many Muslims and Jehovah's Witnesses have been fined in 2017 for meeting for worship or religious study, or for offering religious literature without specific state permission. Court bailiffs are also insisting that a Baptist fined in December 2016, but never given a written court decision, pay his fine by the end of 2017. Another Baptist fined with him is still trying to overturn his punishment, with his case now at the Supreme Court (see F18News 15 December 2017 http://www.forum18.org/archive.php?article_id=2342).

Fines are typically 1,500 Manats (7,350 Norwegian Kroner, 750 Euros or 890 US Dollars). This represents nearly three months' average wages for those with a formal job. However, for those in rural areas, those without a formal job, or pensioners, such fines represent a far heavier financial burden.

The State Committee still appears to be examining religious literature confiscated during joint police and SSS secret police raids on two homes in a village in the northern Qabala District. Two men might face punishment (see below).

The State Committee's Baku representative has arranged the liquidation of seven religious communities in the capital in 2017 for alleged violations of the law (see below).

The authorities continue to warn people not to exercise freedom of religion or belief on the streets. A Baku deputy police chief warned that commemorations and processions outside mosques on the Shia Muslim commemoration of Ashura (which this year fell on 1 October) would not be tolerated (see below).

Meanwhile, an Imam who led worship in a mosque after having gained his religious education abroad has failed to overturn a three-year prison term. He is the first Muslim known to have been punished for leading Muslim worship while having foreign religious education since this "crime" (which targets only Muslims) was introduced into the Criminal Code in 2015 (see below).

Such Religious Affairs Commissions are supposedly advisory bodies and act closely with local State Committee officials. Typically, such Commissions have about 15 members. They are led by a deputy head of a city or district administration and include police officers and Muslim clerics from the state-backed Caucasian Muslim Board.

State Committee officials prepared records of an "offence" against two local Muslims, Jalal Ahadov and Ramin Hasanzade. The cases were then handed to Binaqadi District Court. Both were accused of violating Administrative Code Articles 515.0.2 and 515.0.3.

Administrative Code Article 515.0.2 punishes "Violating legislation on holding religious meetings, marches, and other religious ceremonies". The fine for individuals for this "offence" is between 1,500 and 2,000 Manats (see F18News 2 June 2016 http://www.forum18.org/archive.php?article_id=2184).

Administrative Code Article 515.0.3 punishes "clergy and members of religious associations holding special meetings for children and young people, as well as the organising or holding by religious bodies of organised labour, literary, or other clubs and groups unassociated with holding religious ceremonies" with fines for individuals of between 1,500 and 2,000 Manats (see F18News 2 June 2016 http://www.forum18.org/archive.php?article_id=2184).

On 3 November, Binaqadi District Court found Ahadov guilty and fined him 1,500 Manats, court officials told Forum 18 on 15 December. He lodged an appeal to Baku Appeal Court. However, on 24 November, Judge Namiq Mammadov rejected his appeal, according to court records.

On 7 November, Binaqadi District Court similarly fined Hasanzade 1,500 Manats, court officials added. He lodged an appeal to Baku Appeal Court, which is due to be heard by Judge Mirpasha Huseynov on the morning of 20 December, according to court records.

Aygun Aliyeva is the deputy chair of Binaqadi District Administration overseeing the District's Religious Affairs Commission. Forum 18 was unable to reach her between 13 and 18 December. Her assistant said on 14 December that she was in a meeting. All other calls went unanswered.

The man who answered the phone of Anar Kazimov, the Baku city representative of the State Committee, refused to discuss the raids on the two Binaqadi Muslim communities and the fines on two of their members. "You must talk to the State Committee's press service," the official told Forum 18 on 13 December. He then put the phone down.

The woman who answered the phone at the press office of the State Committee in Baku on 15 December did not respond when Forum 18 asked if it was the press office. She eventually put the phone down. Called back, the line had been switched to a fax machine.

On 12 September, Qabala District Police and the SSS secret police raided two homes in the village of Vandam in northern Azerbaijan as part of an operation, the Interior Ministry noted on its website the same day. Officers seized 77 religious books "whose distribution has been banned", 14 CDs, 11 video and audio cassettes and one "handmade dagger" from the homes of Bahruz Qasimov and Elman Tahirov. The Ministry described the two men as being suspected of "propaganda of religious radicalism".

Officers took Qasimov and Tahirov to the District Police station. They sent the seized items to the State Committee in Baku for an "expert examination".

The telephone of Lieutenant Nijat Humbataliyev, the head of the Police in Vandam, went unanswered each time Forum 18 called on 18 December.

Qabala District Court told Forum 18 on 18 December that no administrative cases against Qasimov and Tahirov have reached the court. Forum 18 has been unable to find out if any cases are being prepared.

Gunduz Pashayev, the representative of the State Committee for the region including Qabala, said that his office had no role in the raids in Vandam. "Other agencies were involved," he told Forum 18 from Sheki on 13 December. "This is the business of the police and the State Security Service. They don't inform us."

All religious literature produced in, published in (including on the internet) or imported into Azerbaijan is subject to prior compulsory censorship. When the State Committee does give permission to publish or import a work it also specifies how many copies can be produced or imported. All religious materials sold must have a sticker noting that they have State Committee approval. State officials have repeatedly denied that this represents censorship (see F18News 1 October 2015 http://www.forum18.org/archive.php?article_id=2107).

Seven religious communities in Baku were liquidated in 2017 for failing to comply with the requirements of the law, the city's State Committee representative Kazimov told a 15 December meeting of national and regional State Committee officials, according to a report on its website the same day. This makes any continuing exercise of the right to freedom of religion or belief by these communities illegal and punishable.

All religious communities must have state registration before they can legally function. However, many communities (like the Baptist church in the northern town of Aliabad) are arbitrarily denied such registration. Muslim communities outside the framework of the state-backed Muslim Board are banned, although this is not enshrined in any law (see Forum 18's Azerbaijan religious freedom survey http://www.forum18.org/archive.php?article_id=2081).

The authorities have repeated their ban on exercising freedom of religion or belief on the streets. The latest such warning came in Baku on 30 September, the day before the Shia Muslim community commemorated the martyrdom of the Muslim prophet Muhammad's son-in-law Imam Ali on the festival of Ashura.

"The conducting of ceremonies and street processions outside areas specially-designated for this will not be allowed," a deputy head of Baku Police, Major-General Sahlab Bagirov, was quoted by APA news agency as declaring.

The government has long sought to ban praying around mosques when no more room is available inside, sharing one's beliefs or religious literature on the streets, religious-inspired processions and demonstrations, and banners on the streets (see Forum 18's Azerbaijan religious freedom survey http://www.forum18.org/archive.php?article_id=2081).

Shia Imam Sardar Akif oglu Babayev (born 12 March 1974) has failed to overturn the three-year prison term handed down by a court in the southern town of Masalli. He was punished for leading worship in a Muslim community after having gained his religious education outside Azerbaijan. He was sentenced under Criminal Code Article 168-1.3.1.

Criminal Code Article 168-1 punishes "violation of the procedure for religious propaganda and religious ceremonies", including by conducting of Islamic rites by a citizen who has received their education abroad. Article 168-1.3.1 punishes those who commit such violations "repeatedly", with a prison term of between two and five years.

Imam Babayev, who is married with three children, was the first known individual to have been punished for this "crime".

On 25 September Judge Rafik Jafarov of Shirvan Appeal Court rejected Imam Babayev's appeal, according to the decision seen by Forum 18.

Imam Babayev's lawyers also noted that in May 2017, parliament amended the Religion Law to allow the Muslim Board to gain exemptions to these restrictions provided the state gives specific agreement for any individual (see F18News 10 July 2017 http://www.forum18.org/archive.php?article_id=2295).

One of Imam Babayev's lawyers, Javad Javadov, notes that Criminal Code Article 168-1 violates Article 9 of the European Convention for the Protection of Human Rights and Fundamental Freedoms (ECHR), which guarantees the right to freedom of thought, conscience and religion.

Javadov also complained to Caucasian Knot news service on 25 September of the police blockade of the court in an apparent attempt to stop Muslims who support Imam Babayev from attending the appeal hearings. (END)