For what is believed to be the first time, an Azerbaijani court has handed down a prison term to punish an individual with foreign religious education for leading Muslim prayers. On 3 July a court in the southern town of Masalli imprisoned 43-year-old Shia Muslim Sardar Babayev for three years. He is preparing to appeal against the sentence to Shirvan Appeal Court. 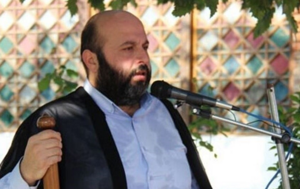 Sardar Babayev
Web screenshot/Voice of America
Imam Babayev was jailed under Criminal Code punishments introduced in December 2015 which solely target those who lead Muslim worship after having gained religious education abroad (see below).

President Ilham Aliyev signed amendments to the Religion Law to allow the state-controlled Caucasian Muslim Board and the State Committee for Work with Religious Organisations to approve the appointment of foreign-educated imams to lead worship in the Board's mosques. The amendments also allow a foreigner appointed by a "religious centre" to conduct "religious propaganda" in Azerbaijan. Religious "propaganda" by any other foreigner remains illegal and punishable (see below).

Meanwhile, exactly three months after the Supreme Court in the capital Baku exonerated Jehovah's Witnesses Valida Jabrayilova and Irina Zakharchenko, the Court finally prepared the decision in writing. After nearly a year in pre-trial detention – mostly in the main secret police prison in Baku – the two were convicted, fined and then had the fine cancelled. They were punished for offering one religious book. However, the Supreme Court offered no compensation (see below).

Sardar Akif oglu Babayev (born 12 March 1974) is married with three children. He completed theological studies at Al Mustafa University in the Iranian city of Qom in 2000. He also studied Islam in Baku. At the invitation of the state-controlled Muslim Board, Imam Babayev led the namaz (Friday prayers) at Masalli's Juma (Friday) Mosque from 2009.

Police summoned Imam Babayev on 22 February 2017. He was immediately taken to Masalli District Court. Judge Nemat Musayev acceded to the request to place Imam Babayev in pre-trial detention for one month and seven days.

Imam Babayev was initially held in Masalli's Police Detention Centre. There he was denied access to the Koran and to a prayer mat. Officials then transferred him to the Justice Ministry Investigation Prison in Kurdakhani in Baku. His pre-trial detention was later extended (see F18News 13 March 2017 http://www.forum18.org/archive.php?article_id=2263).

Babayev's trial began on 19 May under Judge Anar Almammadov at Masalli District Court. For each hearing he was brought down from Baku to Masalli, a journey of 250 kilometres (150 miles) by road.

Prosecutor Nijat Huseynli argued that the Imam's leadership of Friday prayers on 4 November, 18 November and 9 December 2016 constituted a crime under Criminal Code Article 168-1.3.1 because Babayev had gained theological education in Iran. Babayev rejected the accusations against him.

The Judge found Imam Babayev guilty on 3 July and handed down the three-year term in a general regime prison, according to the verdict seen by Forum 18. The time since Babayev's 22 February arrest will count towards his term.

At the final session on 3 July, the prosecutor called for a four-year sentence, Caucasian Knot news agency noted the same day. Imam Babayev, as well as Javadov and his second lawyer Yalchin Imanov argued that the court should find him not guilty.

"Sardar Babayev said that no religious education existed in Azerbaijan for decades, and most of the current religious leaders of the middle and older generations studied abroad," the lawyer Javadov summarised to Caucasian Knot Imam Babayev's final statement to the court. "He said he was completely innocent."

"All I have done is carry out the worship of Allah," Babayev told the court.

Javadov pointed out that Imam Babayev completed his theological education abroad in 2000. This was 15 years before restrictions on foreign-educated Muslim clergy were imposed in 2015. "Therefore, working from the principle that the law does not have retroactive force, bringing him to responsibility for this accusation is unjust," Javadov told Caucasian Knot.

Javadov added that Criminal Code Article 168-1 is itself discriminatory as it violates individuals' equal human rights, including the rights to freedom of religion or belief and of expression.

Oktay Gulaliyev of the organisation Azerbaijan Without Political Prisoners said the authorities imprisoned Imam Babayev "because of his popularity among believers". He described the Imam as "an educated theologian" whose sermons "aroused great interest". "The authorities see a threat in the activity of believers," he explained to Caucasian Knot on 3 July.

The officials who answered the phone at Masalli District Prosecutor's Office on 10 July refused to put Forum 18 through to Prosecutor Huseynli.

The man who the same day answered the phone of Miryahya Badirov, the Masalli representative of the State Committee, told Forum 18 that it was a wrong number.

The Investigation Prison address is:

President Ilham Aliyev signed three amendments to the Religion Law adopted by the Milli Majlis (Parliament) on 17 May, the presidential website noted on 22 June. President Aliyev also signed a Decree the same day instructing the Cabinet of Ministers to oversee implementations of the amendments.

Part of Religion Law Article 21 was amended to read: "Citizens of the Republic of Azerbaijan who have received religious education abroad can be allowed to conduct rituals and ceremonies related to Islam by agreement with the relevant executive authority [State Committee] and the Caucasian Muslim Board."

This appears to give the State Committee the possibility of refusing to grant a request by the Board for a foreign-educated Muslim to lead worship in a mosque. The lawyer Javadov also notes that Criminal Code Article 168-1 has not been amended to take account of this Religion Law amendment.

The lawyer Javadov notes that the state recognises only the Muslim Board as a "religious centre", not the registered Russian Orthodox Diocese of Azerbaijan or other religious entities. "This is discrimination," he complained to Forum 18.

Forum 18 notes that the Jewish, Catholic and Russian Orthodox communities have been able to invite foreign citizens as clerics to serve communities within Azerbaijan.

Supreme Court acquittal, but no compensation 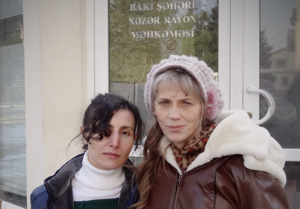 Valida Jabrayilova (left) and Irina Zakharchenko, Khazar District Court, Baku, 28 January 2016
Jehovah's Witnesses
On 8 February, the Supreme Court in Baku acquitted Jehovah's Witness former prisoners of conscience Irina Zakharchenko and Valida Jabrayilova of their convictions for distributing religious literature without state permission. Judge Hafiz Nasibov announced verbally that the Court had found no crime in the actions of the two and had annulled the decisions of the lower courts.

On 13 March, Judge Nasibov's assistant had told Forum 18 that the written decision would be issued by the end of March. He gave no explanation for the delay (see F18News 10 May 2017 http://www.forum18.org/archive.php?article_id=2278).

In his written decision, seen by Forum 18, Judge Nasibov notes that the women had offered one copy of the Jehovah's Witness book "Teach Your Children" to a neighbour. The State Committee had granted Jehovah's Witnesses permission to import 2,000 copies in an 11 August 2014 letter, noting that it contained "nothing negative". The Judge rejected the prosecution case that this meant that Jehovah's Witnesses could distribute these copies only to members of the organisation.

Judge Nasibov therefore concluded that offering a copy of the book to a person who was not a Jehovah's Witness did not represent distribution of religious literature without state permission. He added, however, that because the work did not have the sticker from the State Committee required before any religious work can be sold or otherwise distributed, the two women might have committed an administrative offence.

The Judge noted that Zakharchenko and Jabrayilova had not used coercion in discussing their faith with the neighbour and offering her one religious book. Any coercion is punishable under Criminal Code Article 167-1.

Judge Nasibov found that the Supreme Court case was not the appropriate place to consider the two women's claims for compensation for their unlawful imprisonment. He said they would have to bring a civil suit after the conclusion of criminal proceedings.

Zakharchenko and Jabrayilova were arrested in February 2015 to punish them for offering one religious book without the compulsory state permission. They were held by the then National Security Ministry (NSM) as prisoners of conscience for ten months before they were transferred to an ordinary prison.

The United Nations Working Group on Arbitrary Detention called in December 2015 for the two women to be freed and compensated. In January 2016 the two were convicted under Criminal Code Article 167-2.2.1 and given a large fine. At the same time the fine was waived and the women freed, but they were not compensated for their wrongful imprisonment as the Working Group had demanded (see F18News 29 January 2016 http://www.forum18.org/archive.php?article_id=2144).

During the February 2017 Supreme Court hearing, lawyers for Zakharchenko and Jabrayilova "highlighted the government's breach of fundamental human rights in the unwarranted and abusive treatment of the two Witness women", Jehovah's Witnesses noted. The Court allowed both women to relate what they had endured through more than 11 months of pre-trial detention and how it had affected them.

Jabrayilova described conditions as bad in the then-NSM secret police Investigation Prison. The two women were held there from February until December 2015. "She called her confinement room a 'cage', rather than a cell, in that there was no privacy and everything was exposed to the sight of others," Jehovah's Witnesses noted. "The smell of sewage in this 'cage' was suffocating." Prison officials constantly demanded money from prisoners (see F18News 20 January 2016 http://www.forum18.org/archive.php?article_id=2140).

Other prisoners of conscience have faced torture in prison. Shia Muslim theologian and prisoner of conscience Taleh Bagirov (also known as Bagirzade) was subjected to "severe torture" and a broken nose while in detention at the Interior Ministry's Main Directorate for the Struggle with Organised Crime in December 2015 (see F18News 27 January 2016 http://www.forum18.org/archive.php?article_id=2143).

In a separate case, Jehovah's Witnesses Zakharchenko and Jabrayilova tried to gain compensation for their imprisonment. However, Baku's Administrative Economic Court No. 2 rejected their appeal for compensation. On 6 December 2016, Baku Appeal Court rejected the women's appeal against that decision.