On 16 April, a court in Sevastopol in the Russian-occupied Crimean peninsula ordered Crimean Tatar imam and dentist Rustem Abilev held in pre-trial detention for eight weeks. The Russian FSB security service accuse him of calling for violence against non-Muslims and is preparing a criminal case against him for allegedly calling publicly for "extremism". Local residents "don't believe" the FSB accusations. 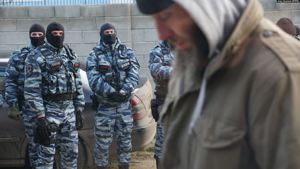 Russian OMON riot police conduct raid in Crimea
Anton Naumlyuk (RFE/RL)
The FSB seized Abilev the previous day in a raid on his home and the village mosque which he helped build. If eventually tried and convicted, he faces up to a four-year jail term and a four-year ban on specific activity (see below).

"Local residents and activists say Rustem Abilev cannot have called for extremism," Radio Free Europe journalist Taras Ibragimov told Forum 18 on 24 April. "They insist he is not an extremist and don't believe the FSB allegations" (see below).

On 24 April, an official of Sevastopol FSB's Investigation Department, after repeatedly asking about Forum 18, refused to say if he was Investigator Andreyev, told Forum 18 it was a wrong number and put the phone down (see below).

Meanwhile, Renat Suleimanov, one of the four Muslims convicted at Crimea's Supreme Court in January for alleged membership of the Tabligh Jamaat Muslim missionary movement, has failed to overturn his four-year jail term on appeal. Russia's Supreme Court in Moscow left the verdict unchanged in a closed hearing on 16 April. The Prosecutor appealed against the suspended prison sentences handed to the other three Muslims convicted with him, but withdrew the appeals before the hearing (see below).

Suleimanov is intending to make a last appeal to the Chair of Russia's Supreme Court and, if that fails, to the European Court of Human Rights in Strasbourg, his lawyer told Forum 18 (see below).

On 23 April, the four men were added to the Russian Rosfinmonitoring "List of Terrorists and Extremists". This means banks are obliged to freeze their assets, with only small transactions permitted (see below).

Ukraine and the international community do not recognise Russia's March 2014 annexation of Crimea. The peninsula is now divided between two Russian federal regions, the Republic of Crimea (with its capital in Simferopol) and the port city of Sevastopol.

After the annexation Russia imposed its restrictions on freedom of religion and belief. Many religious communities have been raided, and many individuals have been fined for possessing books – such as the Muslim prayer collection "Fortress of a Muslim" - which have been banned as "extremist" in Russia.

Religious communities and individuals continue to be fined for not displaying the full name of their registered religious organisation at their place of worship, for meeting for worship without Russian state permission or advertising their faith. Forty such administrative prosecutions are known to have been brought in 2018 of which 28 ended with punishment. 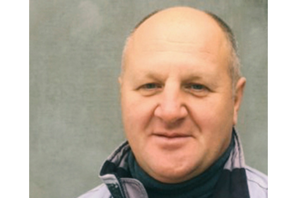 Sergei Filatov
Jehovah's Witnesses
Three Crimean men – Sergei Filatov, Artem Gerasimov and Taras Kuzio - are already under criminal investigation for alleged involvement in Jehovah's Witness activity. The criminal cases – in the southern Crimean city of Yalta and the northern town of Dzhankoi – were both launched just before raids on the homes of community members.

As Russia banned Jehovah's Witnesses in 2017, they face prosecution for participating in the "activity of a social or religious association or other organisation in relation to which a court has adopted a decision legally in force on liquidation or ban on the activity in connection with the carrying out of extremist activity".

Filatov, Gerasimov and Kuzio are living in their homes under restrictions as the Russian FSB continues the investigations.

Armed, masked men, most of them in camouflage with FSB insignia, raided the small, single-storey Khayat (Life) mosque in the village of Shturmovoe on the eastern edge of the city of Sevastopol on 15 April, the FSB, local news agencies and the human rights group Crimean Solidarity noted the same day. Television crews accompanied the raiders.

The raiders then moved to the nearby home in Shturmovoe of the mosque's imam, Rustem Enverovich Abilev (born 18 May 1984). In television pictures of the raid, a man in civilian clothes shows Abilev and his pregnant wife a document. Then masked men in camouflage with no insignia search their home. They seize religious literature, hand-written notes and documents, computers and mobile phones. One masked man is seen copying files from a laptop computer.

As with the raid on the mosque, the masked men brought with them two television crews, as well as other journalists. Some waited outside Abilev's house as the armed men searched the premises.

Masked, camouflaged men then led Abilev down the steps of his house, through the garden and onto the street. They then put him in an unmarked white van and drove him away.

The homes of two mosque members in the village, described in the media as "witnesses", were also searched.

The FSB afterwards told the local media that not only FSB but police and National Guard troops were also used in the raids.

The Russian FSB told the local media that they took Abilev to the FSB headquarters in Sevastopol, where he is being held in detention. The FSB is investigating him under Russian Criminal Code Article 280, Part 1. This punishes "public calls for extremist activity" with a maximum punishment of four years' imprisonment and a ban on specific activity for the same period.

The following day, 16 April, FSB investigator Yuri Andreyev brought a suit to Sevastopol's Lenin District Court to have Abilev held in pre-trial detention. Judge Oksana Fisyuk at the Court ordered him held for eight weeks, until 11 June, as the investigation proceeds, a court official told Forum 18 on 24 April. 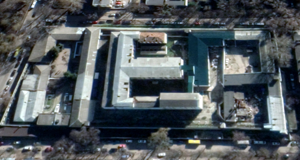 Investigation Prison No. 1, Simferopol
Google/DigitalGlobe
Abilev's lawyer, Lenyara Gabdrakhmanova, appealed against the pre-trial detention order. The appeal arrived at Sevastopol City Court on 24 April, but has not yet been assigned to a judge, the City Court told Forum 18 the same day. The Court official said she did not know the name of the FSB investigator who brought the pre-trial detention suit to court.

The FSB held Abilev for several days in Sevastopol before transferring him to the Investigation Prison in Simferopol. His address:

Abilev, a dentist by profession, founded Hayat (Life) mosque, which he and other local Muslims built near his home in the village of Shturmovoe. Russian security personnel raided the mosque in 2015.

On 2 June 2016, the Russian authorities registered the mosque community as part of the Crimean Muftiate, according to the Russian Federal Tax Service record. Abilev was one of the ten official founders. He serves as the mosque's imam.

On 24 April, an official of Sevastopol FSB's Investigation Department, after repeatedly asking about Forum 18, refused to say if he was Investigator Andreyev, told Forum 18 it was a wrong number and put the phone down.

The FSB told the media after the raid that Abilev (whom they did not name) is the "leader of a group of radical Islamists" who gave sermons "using banned literature which called for violent actions against individuals not sharing his religious convictions". The FSB added: "In the course of closed lessons, the man conducted the ideological cultivation of mosque members, drawing new members into extremist activity."

"Local residents and activists say Rustem Abilev cannot have called for extremism," Radio Free Europe journalist Taras Ibragimov told Forum 18 on 24 April. "They insist he is not an extremist and don't believe the FSB allegations."

Ibragimov disputes the FSB claim that Abilev conducted "closed lessons". He quoted local people as declaring that "the case materials feature a certain audio-recording which was made not during closed meetings but at Friday prayers," Ibragimov told Radio Free Europe's Krym Realii service. "Friday prayers are obligatory for Muslims and all villagers would gather for them."

Ibragimov found it "strange" that any imam would use Friday prayers if he wanted to conduct any "alternative meetings".

One villager described Abilev as "an educated man" and "a devout believer". She noted that Russian forces had already raided the mosque and checked worshippers' identity documents at Friday prayers. "They have only one aim," she told Crimean Solidarity on 15 April, the day of the raids, "to intimidate our people. They have no other aim. This is how they want to drive us out of here."

One appeal fails, other three withdrawn 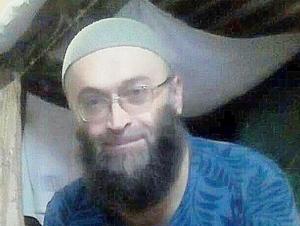 A panel of three judges at Russia's Supreme Court in Moscow left the verdict unchanged in a closed hearing on 16 April, an official of the Court told Forum 18 from the Russian capital on 24 April. The Supreme Court has not yet published its decision.

The official added that the Prosecutor, who had appealed against the suspended prison terms handed to the other three Muslims convicted with him - Talyat Abdurakhmanov, Seiran Mustafaev and Arsen Kubedinov - withdrew the appeals before the hearing.

Suleimanov's lawyer, Aleksandr Lesovoi, represented his client at the hearing. Suleimanov himself refused to go to Moscow because of his state of health, Lesovoi told Forum 18. He is currently still being held in Simferopol's Investigation Prison. But now the verdict has entered into force he could be sent to serve his sentence in a labour camp. 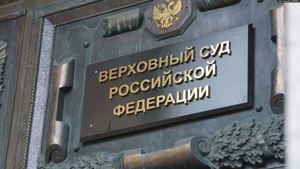 Russia's Supreme Court, Moscow
Anton Naumliuk (RFE/RL)
Lesovoi said he is already preparing a further appeal on Suleimanov's behalf to the Chair of Russia's Supreme Court, as "Renat has been punished solely for exercising freedom of religion". This would be his last possible appeal within Russia. "If that fails, he intends to appeal to the European Court of Human Rights - we have already discussed this," Lesovoi told Forum 18.

The four men met openly in mosques to discuss their faith. "At lessons we studied ayats [verses] from the Koran, the value of praying the namaz, and the zikr [reciting devotional phrases as a reminder of Allah]," Abdurakhmanov told the court at their trial. "These lessons were not conspiratorial and took place in mosques."

On 22 January, at the end of their trial, Crimea's Supreme Court in Simferopol convicted the men under Russian Criminal Code Article 282.2 (Suleimanov under Part 1, the other three under Part 2). This punishes organisation of or involvement in "the activity of a social or religious association or other organisation in relation to which a court has adopted a decision legally in force on liquidation or ban on the activity in connection with the carrying out of extremist activity".

Suleimanov – who is married with three teenage daughters - has been in continuous detention since his arrest in October 2017. He was jailed for four years in an ordinary regime labour camp, followed by one year under restrictions. Abdurakhmanov, Mustafaev and Kubedinov were each given a two and a half years' suspended sentence, with a two year probation period, plus one year under restrictions.

Suleimanov initially lodged his suit to Russia's Supreme Court in Moscow, reaching the Court on 11 March. The Prosecutor's appeal against the sentences of the other three reached the Supreme Court at the same time.

On 23 April, the four men were added to the Russian Rosfinmonitoring "List of Terrorists and Extremists". This means banks are obliged to freeze their assets, with only small transactions permitted. (END) 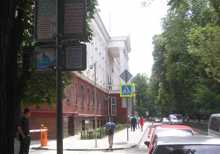