After police raided their home in a village in the southern Jambyl Region where 48 girls were studying the Koran in the school holidays, a husband and wife have both been fined for illegal religious lessons. The appeals of Aidar Kharsanov and Zarina Manu – both from the Dungan ethnic minority - are due to be heard at Jambyl Regional Court on 3 September. 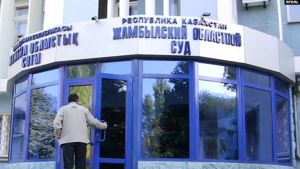 Zhambyl Regional Court, 2009
RFE/RL
The fines on the couple amount jointly to more than four months' average wages for those in formal work, though both Kharsanov and Manu were described in court as "temporarily not working". In addition to the fines, the lower court also banned both Kharsanov and Manu from any future teaching (see below).

Wide-ranging legal amendments which might restrict still further the teaching of religion and increase punishments are in the upper house of parliament, the Senate. The Senate leadership has not yet revealed whether work on the amendments will continue when parliament resumes on 3 September, whether they will be sent for further revision or whether they will be abandoned (see below).

In defiance of its international human rights obligations, Kazakhstan bans individuals from teaching their faith to children unless they have state approval. Also banned is the unapproved publication and distribution of literature about religion which has not undergone prior compulsory state censorship (see Forum 18's Kazakhstan religious freedom survey http://www.forum18.org/archive.php?article_id=2409).

Courts routinely hand down fines and bans to punish the exercise of freedom of religion or belief without state approval. Forum 18 found 79 such administrative prosecutions across Kazakhstan in the first six months of 2018 to punish individuals, religious communities and companies. Of these, 61 ended up with punishments (see F18News 4 July 2018 http://www.forum18.org/archive.php?article_id=2392).

On 20 February, a court in Karkaraly District of Karaganda Region fined Muslim Dastan Abdrakhmanov for teaching his faith to school-age children in his home village of Borlybulak (see F18News 11 April 2018 http://www.forum18.org/archive.php?article_id=2368).

Proposed amendments to the Religion Law and a wide range of other laws would have restricted still further the teaching of religion, with extra punishments. The amendments were initially prepared in 2017 by the then Religion and Civil Society Ministry (now the Social Development Ministry). They were approved in parliament's lower house in May 2018 and sent to the upper house, the Senate (see F18News 5 June 2018 http://www.forum18.org/archive.php?article_id=2384).

A Senate official told Forum 18 from the capital Astana on 22 August that the Senate leadership has so far not said whether or not it has decided to continue work on the amendments when the house resumes on 3 September after the summer break.

Aidar Kharsanov, who is 39, and 34-year-old Zarina Manu – who are both ethnic Dungans - live in the village of Masanchi in Kordai District in the southern Jambyl Region. The village is just 8 kms (5 miles) north of the Chu River, which here marks the border between Kazakhstan and Kyrgyzstan.

On 7 July, Kordai District Police raided Kharsanov and Manu's home for an "inspection", claiming to be responding to a message that religious activity was underway. Officers found the couple teaching the Koran to 48 school-age girls, according to the subsequent court decisions.

Kharsanov and Manu said they had begun giving Koran lessons on 23 June. This was about four weeks after local school holidays had begun.

The Head of Kordai District Police, Azamat Aikhimbekov, told Forum 18 he had not taken part in the 7 July raid on Kharsanov and Manu's home in Masanchi. However, he refused to say why their home had been raided, who had told the police of the Koran lessons and why individuals should be punished for offering religious lessons to children if their parents have given approval.

"I need to report to my superior, and can't give you any information," Aikhimbekov told Forum 18 from Kordai on 22 August. "You will have to ask our Regional Police press office."

Forum 18 asked Gulsara Mukhtarkulova, head of the Regional Police press office, in writing in the afternoon of 22 August why police had raided Kharsanov and Manu's home simply because they were teaching their faith to children with their parents' permission. Forum 18 received no reply by the end of the working day in the regional capital Taraz.

Article 490, Part 3 punishes: "Carrying out missionary activity without state registration (or re-registration), as well as the use by missionaries of religious literature, information materials with religious content or religious items without a positive assessment from a religious studies expert analysis, and spreading the teachings of a religious group which is not registered in Kazakhstan". The punishment is a fine of 100 Monthly Financial Indicators (MFIs), with deportation if the individual is a foreign citizen.

Article 490, Part 1, Point 3 punishes: "Violating the requirements of the Religion Law for .. import, manufacturing, production, publication and/or distribution of religious literature and other religious materials, and items for religious use". The punishment for individuals is a fine of 50 MFIs.

Police accused Manu of teaching religion illegally to underage girls. Police drew up a record of an offence against her under Administrative Code Article 490, Part 1, Point 1. On 24 July prosecutors also handed her case to Kordai District Court.

Article 490, Part 1, Point 1 punishes "violation of procedures established in law for conducting rites, ceremonies and meetings". Punishment for individuals is a fine of 50 MFIs, and for organisations a fine of 200 MFIs and a three-month ban on activity.

In separate hearings on the morning of 6 August, Judge Baiterekov of Kordai District Court found both Manu and Kharsanov guilty. Neither was represented by a lawyer and both admitted their "guilt", according to the decisions seen by Forum 18.

Manu told the court that "she did not know that one should not teach the Koran to children as she does not have higher education, and she had herself studied [Islam] with a woman in the village of Sortobe", the court decision notes. "She repented of what she had done and asked not to be punished harshly."

The Judge handed Manu under Administrative Code Article 490, Part 1, Point 1 a fine of 50 MFIs, 120,250 Tenge, and a ban on activity. The fine represents about one month's average wage for those in formal work. The court decision lists Manu as being "temporarily not working".

Kharsanov told the court that no one had given him permission to teach the Koran. "He also taught these children the dua [Muslim prayers], which he himself collected and prepared as booklets," the court decision notes. "He repented of what he had done and asked not to be punished harshly."

Forum 18 was unable to reach Daniyar Turysbek of Kordai District Prosecutor's Office, who brought both cases in court. His colleagues told Forum 18 on 22 August that he is in hospital.

One of Turysbek's colleagues, Isak Zhanteryk, told Forum 18 that "propaganda of religion" is "banned by law". "There are special places where religious education is allowed and people allowed to conduct it," he insisted. Asked who – if anyone - had suffered because Kharsanov and Manu had taught the Koran to girls with their parents' permission, he responded: "I don't know, but it's not necessary for someone to have suffered to bring a case."

The Religious Affairs Department of Jambyl Regional Administration directed Forum 18 to Samrat Mutanov. However, his phone went unanswered on 22 August.

Both Manu and Kharsanov lodged appeals to Jambyl Regional Court. The cases have been assigned to Judge Samat Tolesbai, the Court chancellery told Forum 18 on 22 August.

Judge Tolesbai is due to hear the appeals in separate hearings in the afternoon of 3 September. (END)