On 31 October a Council of Churches Baptist, Yuri Bekker, was given a criminal conviction for refusal to pay a fine imposed in 2016 for handing out religious literature on the street. He was given a one-year restricted freedom sentence and ordered to pay fines and a fee for a state "expert analysis" of his own Christian books. He also faces the threat of losing his home and of being jailed. Bekker told Forum 18 that he will not pay the fine as he was only exercising his constitutional rights and he did not ask the state to analyse his own books (see below). 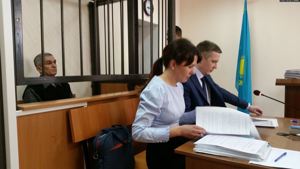 Teymur Akhmedov in defendant's cage, and lawyers, Astana's Saryarka District Court No. 2, 27 March 2017
Svetlana Glushkova (RFE/RL)
On 13 October Jehovah's Witnesses filed an appeal to the Supreme Court for the acquittal and release of prisoner of conscience Teymur Akhmedov, a cancer sufferer who was tortured and jailed in May for five years and banned for a further three years from conducting "ideological/preaching activity". The 61-year-old bus driver was accused of breaking Criminal Code Article 174 ("Incitement of social, national, clan, racial, or religious discord, insult to the national honour and dignity or religious feelings of citizens, as well as propaganda of exclusivity, superiority or inferiority of citizens on grounds of their religion, class, national, generic or racial identity, committed publicly or with the use of mass media or information and communication networks, as well as by production or distribution of literature or other information media, promoting social, national, clan, racial, or religious discord") when he shared his beliefs with KNB secret police informers.

The United Nations (UN) Working Group on Arbitrary Detention has publicly stated that Kazakhstan should "release Mr. Akhmedov immediately and accord him an enforceable right to compensation and other reparations, in accordance with international law". A Supreme Court official refused to tell Forum 18 if this would happen (see below).

On 31 October a Council of Churches Baptist, Yuri Bekker, was given a criminal conviction for refusal to pay fines imposed in 2015 and later for handing out religious literature on the street. Judge Galiya Baktygulova of Zhaksy District Court in the northern Akmola Region imposed a one-year restricted freedom sentence on Bekker under Criminal Code Article 430, Part 1. This punishes failure to fulfil a court decision over a period of more than six months or interfering with such a decision, with a penalty of imprisonment or restricted rights for up to three years.

The decision, seen by Forum 18, notes that Bekker is under one year's restricted rights, under which he "is obliged not to change his place of permanent residence and work without notifying the appropriate state organ, not to attend public places of entertainment, cafes, bars, and restaurants". He is also "obliged to appear before the state probation organ to be registered within 10 days of the court decision entering into force."

An official of Zhaksy Court's Chancellery, who refused to give her name, insisted to Forum 18 on 2 November that Bekker has until the end of 2017 to pay the fine and a fee for state "expert analysis" of the Christian books confiscated from him.

If Bekker does not comply with the provisions of the verdict, Judge Baktygulova's decision states that "the remaining part of the term will be replaced with deprivation of liberty (imprisonment) for the same period".

Bekker told Forum 18 on 2 November that he did not pay the fines or the fee for state "expert analysis" as "I did not violate the law and I did not ask the state to carry out an 'expert analysis' of my own Christian books".

Yuri Rudenko of the Council of Churches Baptists pointed out to Forum 18 on 2 November that all Bekker did "was to come to the courts and explain to them that he will not pay the fines or the state fee as he only peacefully exercised his faith, which right is guaranteed by the Constitution".

The official of Zhaksy Court's Chancellery insisted to Forum 18 that "Bekker has to pay the fine". Asked what measures the authorities will take if he does not pay the fine, she refused to answer, saying "he has to pay it by the end of this year". When Forum 18 repeated the question she raised her voice and shouted: "What do you want from us? You are not an interested party in the case". She then put the phone down.

Rudenko of the Baptists noted that the sentence is the first Criminal Code Article 430 punishment imposed on Baptists for exercising their freedom of religion and belief. In June 2015 a similar case opened under Criminal Code Article 430 against Council of Churches Baptist Nikolai Novikov was dropped, after protests from around the world (see F18News 10 June 2015 http://www.forum18.org/archive.php?article_id=2072).

On 10 September 2015, police detained Bekker and a fellow Baptist from Akmola Region, for offering Christian literature to passers-by at the market in Arkalyk in the neighbouring Kostanai Region. In March 2016 both Baptists were fined 74,235 Tenge each, with each also having to pay half the cost of a September 2015 "expert analysis" of confiscated Christian literature – which was taken by police without the legally required confiscation record being provided. The literature was also ordered to be destroyed (see F18News 11 May 2016 http://www.forum18.org/archive.php?article_id=2176). However, the destruction order was subsequently overturned and the literature ordered to be returned to the Baptists (see F18News 13 May 2016 http://www.forum18.org/archive.php?article_id=2177).

Bekker was among four local Baptists brought to court in April 2014 for "illegal" religious literature distribution. However, they were acquitted as the Judge ruled that the prosecution had been brought too late (see F18News 17 June 2014 http://www.forum18.org/archive.php?article_id=1970).

An official from the Supreme Court's Office of Supervisory Appeals, who refused to give her name, told Forum 18 on 3 November that no date had been set for the appeal, and refused to give more details. But she said that the Court has 30 working days from the day of acceptance (which she refused to give) to hear the appeal.

Prisoner of conscience Akhmedov was jailed on 2 May for five years and banned for a further three years from conducting "ideological/preaching activity". He denied National Security Committee (KNB) secret police charges of "inciting religious discord" when he shared his beliefs with KNB informers. The 61-year-old bus driver was held in pre-trial detention from 18 January, where he was tortured with beatings. Officials have repeatedly refused to allow him to be treated in hospital for the cancer he is suffering from, and to read religious literature (see F18News 3 May 2017 http://forum18.org/archive.php?article_id=2277).

The KNB secret police brought criminal charges against Akhmedov's two lawyers for "revealing information from a pre-trial investigation", when they appealed to President Nursultan Nazarbayev for the case against their client to be halted (see F18News 3 April 2017 http://www.forum18.org/archive.php?article_id=2269). But the criminal cases against the lawyers were dropped after prisoner of conscience Akhmedov was jailed (see F18News 22 September 2017 http://www.forum18.org/archive.php?article_id=2317).

On 2 October the United Nations (UN) Working Group on Arbitrary Detention publicly stated that Kazakhstan should release prisoner of conscience Akhmedov "immediately". The Working Group's Opinion (A/HRC/WGAD/2017/62) finds that Kazakhstan has contravened both the Universal Declaration of Human Rights and the International Covenant on Civil and Political Rights. "The Working Group considers that, taking into account all the circumstances of the case, the appropriate remedy would be to release Mr. Akhmedov immediately and accord him an enforceable right to compensation and other reparations, in accordance with international law" (see http://www.ohchr.org/Documents/Issues/Detention/Opinions/Session79/A_HRC_WGAD_2017_62_EN.pdf).

The Supreme Court official Forum 18 spoke to refused to say if the Court or the government will order Akhmedov's immediate release, compensation and reparation, as the UN Working Group on Arbitrary Detention requires.