Another foreign Catholic priest has been forced to leave Belarus after the authorities refused his bishop's request to extend permission for him to continue to serve in the country. Polish citizen Fr Jozef Geza had served as parish priest in the western city of Grodno since 1997. He held his last Mass in the city's Holy Redeemer Church on 27 December and has since left Belarus. 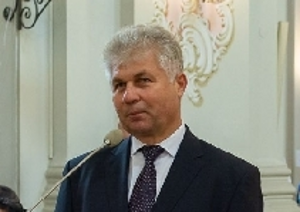 Aleksandr Rumak, 23 October 2021
Viktar Vedzen/Catholic.by
Such permission for foreign citizens to conduct religious work in Belarus is granted – or refused – by the country's senior religious affairs official, the Plenipotentiary for Religious and Ethnic Affairs Aleksandr Rumak in the capital Minsk (see below).

When such permission is granted, it allows the foreign citizen to conduct religious activity only in one named registered religious community. That means, for example, that if a foreign Russian Orthodox or Catholic priest wants to lead a religious service in another parish, further permission is needed (see below).

Aryayev said Fr Geza is the only foreign religious worker for whom Rumak has refused permission in recent months (see below).

The spokesperson of the Catholic Bishops' Conference, Fr Yuri Sanko, told Forum 18 from Minsk that he is not aware that Plenipotentiary Rumak has in recent months refused permission for other foreign Catholics to serve in Belarus (see below).

In July 2022, Plenipotentiary Rumak refused yet another request from the Catholic Bishop of Vitebsk Oleg Butkevich for permission to serve for Jesuit priest Fr Klemens Werth. The bishop has been seeking such permission for him in vain for the past seven years. This means that Fr Werth – a Russian citizen - can serve only in an administrative role in the diocese (see below).

Numerous Russian Orthodox and Catholic priests have been forced to leave Belarus after Plenipotentiary Rumak or his predecessor refused bishops' requests for permission for the foreign priests to conduct religious work in the country as residents or visitors. Some Protestants who local communities wanted to invite from abroad have similarly been denied such permission (see below).

In 2017, the then head of the Catholic Church in Belarus, Archbishop Tadeusz Kondrusiewicz, called for the state to end the requirement that foreign citizens need permission to conduct any religious activity (see below).

Another Polish Catholic priest who left Belarus in 2017 after 28 years' service had seen his application for Belarusian citizenship rejected five years earlier (see below).

The state retains tight controls over all exercise of the right to freedom of religion or belief. Meetings for religious purposes are allowed only if a community has managed to gain the compulsory state registration. Only registered religious communities are allowed to invite foreign citizens for any public religious activity. If the state grants such permission it is only valid for the one religious community which has obtained it.

Under a January 2008 Council of Ministers Decree, amended in July 2010, permission for foreign citizens to work for religious purposes (whether as a resident or as a visitor) is given or refused by the Plenipotentiary for Religious and Ethnic Affairs. Foreign citizens must demonstrate knowledge of Belarus' state languages (Belarusian and Russian) in order to perform religious work. The Plenipotentiary defines the period of permission, can at any time withdraw permission, and is not obliged to communicate the reasons for a refusal.

If the Plenipotentiary decides to give permission for a foreign religious worker to work, the regional Executive Committee's [local authority] Ideology, Culture and Youth Department is responsible for issuing a certificate specifying in which single religious community the individual can work, and the exact dates for which permission is given (usually three months, six months or one year).

The Catholic Church is the community most hit by such controls on foreigners invited to serve in the country, though the Russian Orthodox Church has also faced denials of permission to serve. State officials have steadily reduced the numbers of foreign Catholic clergy.

"Such refusals from Rumak are often accompanied by a comment that the Church should seek clergy among Belarusian nationals," one Catholic told Forum 18. 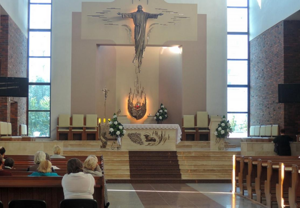 Fr Geza, who is 79, has served in the Holy Redeemer parish in Devyatovka, a northern suburb of Grodno where many blocks of flats were built from the late 1980s. The parish was established in 1992 and the then bishop put it in the care of priests of the Redemptorist Order. Construction of the church and pastoral centre began in 1997.

Fr Geza has served in Belarus from the 1990s, initially living in Poland and crossing the border. In 1997 he was allowed to move to Belarus, where he served in a variety of roles, including as abbot of the Redemptorist monastic community in Grodno. In June 2020 he celebrated in the Holy Redeemer parish the 50th anniversary of his priestly ordination, and in August 2022 celebrated his 60th anniversary of taking vows as a member of the Redemptorist Order.

Aryayev said Fr Geza is the only foreign religious worker for whom Rumak has refused permission to work in recent months. The most recent known refusal was for Fr Klemens Werth in late July 2022 (see below).

The spokesperson of the Catholic Bishops' Conference, Fr Yuri Sanko, told Forum 18 from Minsk on 4 January that he is not aware that Plenipotentiary Rumak has in recent months refused permission for other foreign Catholics to serve in Belarus.

Permission denial means priest can serve only in administrative role 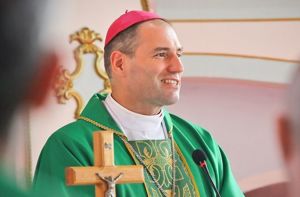 Fr Werth, a Russian citizen, has worked in Vitebsk Diocese since 2015. Bishop Butkevich gained the required permission for him to conduct religious work from November 2015, but the Plenipotentiary refused to extend this in November 2016 when the bishop wanted to appoint him to a new parish.

Bishop Butkevich has been seeking permission for Fr Werth in vain since then. This means that the priest can serve in the diocese only in an administrative role. The diocesan website lists him as administrator in charge of finances.

Forum 18 was unable to ask Aryayev of the Plenipotentiary's Office about the repeated denial of permission to serve for Fr Werth as he had already put the phone down.

Some foreign Catholic priests sense that permission will be denied

Some foreign Catholic priests have had indications from officials that the regime personally dislikes them, so Plenipotentiary Aleksandr Rumak is likely not to grant a request of their bishop to extend their right to serve in Belarus when their permission expires. These priests therefore choose instead to end their service at that point and leave the country, one Catholic who wished to remain anonymous for fear of state reprisals told Forum 18. 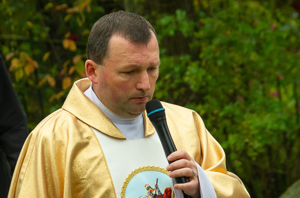 Fr Jerzy Wilk, Voropaevo, 29 September 2019
Leanid Yurik/Catholicnews.by
The authorities frequently refuse to allow foreign Catholic and Russian Orthodox priests to continue to serve in Belarus, often after many years' service in the country.

Without any explanation, Belarus' then senior state religious affairs official Leonid Gulyako abruptly cancelled the permission for Polish Catholic priest Fr Jerzy Wilk to continue serving his parish in the north-eastern Vitebsk Region. Gulyako gave his bishop one day's notice of the cancellation, which came into effect on 3 September 2020, half way through the one-year period for which Fr Wilk had earlier been given permission.

Fr Wilk said he has no idea why the state permission for him to work as a priest was cancelled. He insisted that his sermons did not touch on political issues. "All I talked about was good and evil, of the need to love, about everything I believe myself," he told Forum 18.

The then Plenipotentiary Gulyako repeatedly accused foreign Catholic priests of violating the law, including allegedly by speeding, involvement in political activity, and poor command of the Belarusian language.

Vitebsk-based priest Fr Vyacheslav Barok (who fled to Poland to avoid prosecution in July 2021) complained that though the Plenipotentiary's Office is supposed to give permission to carry out religious activities for a year, if it does grant permission it usually does so for only three to six months. This forces a diocese to re-apply after the permission expires.

"The Constitution guarantees us our religious rights but the state constantly interferes in the Church's affairs," Fr Barok told Forum 18 in May 2017. "The Plenipotentiary decides who will serve and where."

Calls for restrictions on foreign religious workers to be changed 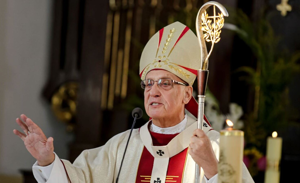 Archbishop Tadeusz Kondrusiewicz
Uladz Hrydzin (RFE/RL)
Both Catholic and Orthodox leaders – who say they do not have enough native priests –
want such restrictions on foreigner workers changed.

Tadeusz Kondrusiewicz, the then Archbishop of Minsk and Mogilev and head of the Catholic Church in Belarus, at an 11 April 2017 press conference in Minsk criticised the ban on foreign citizens conducting religious services without obligatory state permission.

On 31 August 2020 Archbishop Kondrusiewicz – a Belarusian citizen – was denied permission to return to Belarus from a brief visit to Poland. The regime allowed the Archbishop to return on 24 December 2020. When he reached the age of 75 on 3 January 2021 he offered his resignation to Pope Francis, as all Catholic Bishops have to do. The Pope accepted this. (END)

Full reports on freedom of thought, conscience and belief in Belarus

Visiting the closed Catholic Church of Saints Simon and Helena (Red Church) in central Minsk on 12 October, the day the parish was ordered to remove its property, Tadeusz Kondrusiewicz, retired Archbishop of Minsk-Mogilev, "was crying from the hopelessness of the situation". The worship ban and enforced closure followed a "strange and ambiguous" early-morning fire on 26 September in a small annexe. "Despite the small area of damage, the entire church is sealed and not accessible to the public for holding services," parishioners complained.

On 25 September, Police banned Minsk's New Life Church from meeting for Sunday worship in the car park of the building from which officials forcibly evicted it in February 2021. Police detained the Church's pastor Vyacheslav Goncharenko and another pastor Antoni Bokun. A judge fined each two months' average wage for leading the 18 September service which police had observed. Minsk City Executive Committee refuses to return the seized church building or allow the Church to meet for worship in the car park.

Minsk City Administration and local police have warned New Life Pentecostal Church that meetings for worship in the church car park are illegal and threatened to liquidate the Church in court. Liquidation would make any exercise of freedom of religion or belief illegal and punishable with up to a two-year jail term. The Church meets each Sunday in the car park after officials evicted it in February 2021 from the church building it bought in 2002. Officials refuse to explain why the Church cannot use its building.