Armed and masked soldiers have detained Pastor Leonid Ponomaryov, Pastor of a Baptist Council of Churches congregation in Russian-occupied Mariupol, and his wife Tatyana. They took them from their home on the evening of 21 September. Family and church members have been unable to find out since who took the Ponomaryovs and why, or where they are now being held. 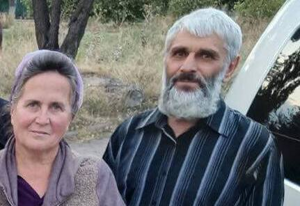 Tatyana and Leonid Ponomaryov
Private [CC BY-NC-ND 4.0]
Neighbours "distinctly heard groans and cries" as the masked men took Leonid and Tatyana away "in an unknown direction", local Baptists said. The two were initially taken to the police station and told that they would be held until the Russian-controlled referendum on the status of Donetsk Region was over. However, they were not released when the referendum concluded on 27 September (see below).

Russian officials had initially claimed the couple had been involved in "extremist activity" and searched the Baptist Church. They sealed the church to prevent future meetings for worship to be held. Some other Protestant churches – including at least one other local Council of Churches Baptist congregation – are still able to meet for worship in Mariupol, though others have been forcibly closed (see below).

Forum 18 has been unable to find out who has seized Pastor Leonid Ponomaryov and his wife, or why. The duty officer at the Donetsk People's Republic (DPR) State Security Ministry – who did not give his name – referred all enquiries to the police. "For kidnappings, if that is the case, you should go to the police," he told Forum 18 on 6 October. Told that armed and masked men in army uniform took the couple, the officer repeated his response.

The duty officer at the Russian-controlled police of Mariupol's Kalmiusky (Ilichivsky) District, where the Ponomaryovs live, refused to answer any questions. "We can't give any information by phone," she told Forum 18 on 6 October. She refused to put Forum 18 through to or give a phone number for Pavel Sotnikov, the District police chief. The telephone at Mariupol City Police went unanswered each time Forum 18 called on 6 October.

The woman who answered the phone of the Missing Persons Department of the DPR Human Rights Ombudsperson's Office in Donetsk, who would not give her name, said that she could not provide information to third parties. "We have a law on the protection of personal data," she told Forum 18 on 6 October. "Only relatives can appeal to our Office and must do so in writing."

The press officer at the Ombudsperson's Office in Donetsk, who gave her name only as Inna, referred all enquiries about the Ponomaryovs to the police. She refused to discuss anything else on 6 October, as Forum 18 is not accredited as a news outlet with the DPR authorities.

The telephone of the DPR General Prosecutor's Office in Donetsk went unanswered each time Forum 18 called on 6 October.

In a 3 October statement to its members and congregations internationally, the International Council of Churches asked for appeals for the Ponomaryovs to be sent "ONLY from churches of the Russian Federation" (see below). 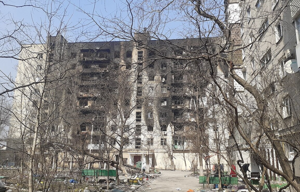 War damage in Mariupol, 23 March 2022
Wanderer777 [CC BY-SA 4.0]
Mariupol, in Ukraine's Donetsk Region, was the location of bitter fighting following Russia's renewed invasion of Ukraine, which was launched in February 2022. The city was finally occupied by Russian troops and forces of the Russian-backed Donetsk People's Republic in May 2022.

Since then, Russian or DPR officials and soldiers in newly-occupied parts of Donetsk Region have conducted searches in and sealed places of worship, confiscated equipment, demanded documents, and in at least one case forcibly expelled church members from their building. They have also pressured some religious leaders to cut ties with Ukrainian religious bodies and link with those in Russia.

Russian officials and soldiers have conducted similar raids, searches and enforced closures of places of worship in other regions of Ukraine they have occupied in their 2022 war. They have also pressured some religious leaders to cut ties with Ukrainian religious bodies and link with those in Russia or Russian-occupied Crimea. 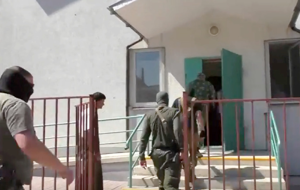 After 2014, Mariupol remained in Ukrainian government hands until the February 2022 Russian invasion. As of early October 2022, Russian and DPR forces control about 60 percent of Ukraine's Donetsk Region.

Since 2014, the internationally unrecognised DPR authorities have imposed severe restrictions on all exercise of the right to freedom of religion or belief.

The internationally unrecognised DPR entity's June 2016 Religion Law did not explicitly ban exercising freedom of religion or belief without official permission but did impose other restrictions against international human rights standards. In outlining procedures for gaining official permission to exist the Religion Law presumed that such permission was required. An April 2018 Religion Law amendment required all non-Moscow Patriarchate religious organisations to re-register by 1 March 2019. The amendment specifically banned religious organisations from functioning if they failed to get re-registration by the deadline.

The DPR authorities have seized numerous places of worship and used them for their own purposes.

Since Russian forces occupied Mariupol, Russian police had several times visited the home of Leonid Ponomaryov and his wife Tatyana in Kalmiusky (Ilichivsky) District of northern Mariupol. They had also summoned him for questioning more than once. Ponomaryov leads one of the congregations in the city of the Council of Churches Baptists.

Council of Churches Baptists do not seek official permission to exist in any of the countries where they operate. Their places of worship are therefore unregistered and are the private property of one or more church members.

In early September, military personnel came to Pastor Ponomaryov's church in Kurchatov street in the north-east of the city. They asked church members to open the church for the Russian-backed authorities to hold the referendum for Ukraine's Donetsk Region to join Russia, held from 23 to 27 September. Church members refused, noted Voice of the Martyrs Korea, which maintains contacts with local Christians. The authorities then sealed the church building.

Church members reopened the church for their regular Sunday meeting for worship. However, military personnel returned during the worship service and took away Pastor Ponomaryov, who was leading the service, Voice of the Martyrs Korea added.

The military personnel also inspected religious literature at the church, but appear not to have found anything "extremist".

After the service, church members went to the military office with documents proving that the house is private property. They noted that according to the proposed DPR referendum law (adopted on 20 September), the referendum should be held in premises provided by the authorities, not in a private home. The authorities looked at the documents and released Pastor Ponomaryov.

On the evening of 21 September, a group of armed and masked men in Russian or DPR military uniforms arrived at the Ponomaryovs' home in cars with no number plates. "Seeing the military vehicles without numbers, neighbours started to come out onto the street to find out what had happened," local Baptists noted on 3 October. "But they were ordered to return home and not to come out."

The armed men remained in the Ponomaryovs' home for about two and a half hours. By now it was dark, but "the neighbours distinctly heard groans and cries" as the masked men took Leonid and Tatyana away "in an unknown direction", local Baptists said.

On 22 September, church members tried to find out the whereabouts of Leonid and Tatyana Ponomaryov. "But neither then nor on subsequent days could they get any answers," local Baptists lamented. An officer of the Russian Interior Ministry told relatives that they should not worry as they would be freed immediately after the referendum, which concluded on 27 September.

On 30 September, two pastors from the Russian city of Rostov-on-Don travelled to Mariupol to try to find out where Leonid and Tatyana Ponomaryov are being held and why they were seized. Together with Leonid's brother Viktor Ponomaryov, they visited the DPR State Security Ministry, military headquarters, Prosecutor's Office and police. "But at all these agencies they received the almost identical response: 'They're not here and we don't know where they are.'"

The three then travelled to Donetsk to try to get answers from the DPR Interior Ministry and State Security Ministry secret police. "There too they were given exactly the same answers," local Baptists noted. The three then lodged a written application to the DPR Interior Ministry. "The application was accepted and they were promised an answer within 30 days."

As the three men were returning to Mariupol from Donetsk, police phoned them and asked them to go to Leonid and Tatyana Ponomaryov's home. Present at the home were several investigators. "They questioned his brother Viktor and the neighbours, wrote it down in brief and then left," local Baptists said. Officers had refused to say if the family would receive any answers.

"In all their meetings with officials of various entities, when church members asked them to identify themselves none of the representatives of the authorities would give their name, rank or position," church members noted.

On 1 October, the Ponomaryovs' children issued a statement thanking church members for prayers for their parents. "For 10 days already we know nothing about them," they wrote. "A group of church members from Mariupol and Rostov went round all the agencies and institutions, not only in Mariupol but in the regional centre [Donetsk], and were told nothing about our parents anywhere."

The Ponomaryovs' children added that various churches were praying for their parents and fasting on 2 and 3 October. They asked for information to be spread widely.

In a 3 October statement to its members and congregations internationally, the International Council of Churches asked for appeals for the Ponomaryovs to be sent "ONLY from churches of the Russian Federation". (END)

Full reports on freedom of thought, conscience and belief in Donbas

Full reports on freedom of thought, conscience and belief in Occupied Ukraine 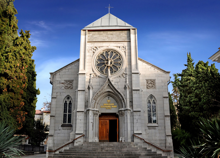