The criminal trial of 19-year-old Jehovah's Witness conscientious objector Jovidon Bobojonov for refusing compulsory military service on grounds of conscience could begin at the Military Court in the capital Dushanbe in early March. One official of the Court told Forum 18 that the criminal case is close to completion. If convicted, Bobojonov faces between two and five years in prison. 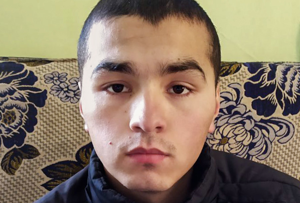 Jovidon Bobojonov
Jehovah's Witnesses
In late January, officials transferred Bobojonov from the military unit where he had been confined for nearly four months to Dushanbe's Investigation Prison. Military Prosecutors opened a criminal case against him over his refusal to perform compulsory military service on grounds of conscience (see below).

"Jovidon Bobojonov has become emotionally and physically exhausted since the time he was forcefully kidnapped from his home by military officers on 4 October 2019," Jehovah's Witnesses complained to Forum 18 on 25 February (see below).

Asked why the Judge at Dushanbe Military Court ordered Bobojonov to be held in pre-trial detention, her assistant responded: "Because the case is serious and the Judge had all the reasons to give the order" (see below).

Asked why Bobojonov faces criminal prosecution for refusing military service on grounds of conscience, Investigator Mekhrubon Ibrahimzoda of Dushanbe's Military Prosecutor's Office claimed that the Defence Ministry gave Bobojonov "the option to serve in a special battalion, where they do not take up arms but do construction work. He refused this, which is why a criminal case was opened" (see below).

In defiance of its international human rights obligations, and despite repeated requests from the United Nations (UN) Human Rights Committee and the UN Working Group on Arbitrary Detention, Tajikistan has not introduced a possibility for a genuinely civilian alternative service to the military conscription imposed on young men.

Sodik Shonazarov, Senior Advisor of the Legal Policy Section of the Presidential Administration, refused to explain why – despite government claims - no law introducing alternative civilian service appears to be in preparation. "You can call back tomorrow, what is the hurry?" he told Forum 18. He then refused to answer when Forum 18 asked why Tajikistan was so swift to arrest and prosecute conscientious objectors such as Bobojonov, and so slow to act on repeated Human Rights Committee recommendations in 2004, 2013, and 2019 (see below). 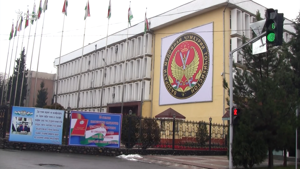 Defence Ministry, Dushanbe
Ozodi.org (RFE/RL)
Military service of two years is compulsory for almost all able-bodied young men between the ages of 16 and 27.

Indeed, military comments in 2007 suggested that the ban that year on the Jehovah's Witnesses might be linked to this community's conscientious objection to compulsory military service.

The Working Group on Arbitrary Detention in October 2017 asked for a reply within six months as to "whether any legislative amendments or changes in practice have been made to harmonize the laws and practices of Tajikistan with its international obligations in line with the present opinion". As of 26 February 2020, Tajikistan had not replied to the Working Group.

Instead, conscientious objectors have been jailed, including Daniil Islamov, jailed for six months in 2017. Officials claimed as an excuse that a civilian alternative service law has not been introduced.

On 29 March 2019 Tajikistan claimed to the UN Human Rights Committee that an alternative service law was being prepared. Yet in January 2020 Subhiddin Bakhriddinzoda of the President's National Centre for Law told Forum 18 that "there is no draft law on alternative civilian service ready to present to Parliament".

Bakhriddinzoda claimed that one had been prepared with the involvement of the Presidential Administration, but that it would only be considered after parliamentary elections on 1 March.

Muhammadato Sultonov, Parliament's Press Secretary, on 26 February also refused to comment on the issue or put Forum 18 through to any parliamentary deputies.

Sodik Shonazarov, Senior Advisor of the Legal Policy Section of the Presidential Administration, refused to say why Tajikistan had not introduced a genuine alternative civilian service. "You can call back tomorrow, what is the hurry?" he told Forum 18 on 26 February.

Shonazarov of the Presidential Administration refused to answer when Forum 18 asked why Tajikistan was so swift to arrest and prosecute conscientious objectors such as Bobojonov, and so slow to act on repeated Human Rights Committee recommendations in 2004, 2013, and 2019. "Please, call back tomorrow and speak to Zarif Alizoda, who is our Chief," Shonazarov responded. He claimed that Alizoda is "busy, and will be available tomorrow."

From 4 October 2019, 19-year-old Jehovah's Witness conscientious objector Jovidon Jamolovich Bobojonov (born 10 March 2000) was held in a military unit near Dushanbe pending trial as he refused to bear arms. His requests to do an alternative civilian service, first made in writing on 22 August 2019, were refused.

On 4 October 2019 officers took Bobojonov into custody and escorted him to the Conscription Office, where they detained him. On 6 October 2019, officers sent him against his will by train to military unit 45075 in Rudaki District, just south of the capital Dushanbe.

In October 2019, Bobojonov's parents complained about their son's arrest and detention to officials. Among the replies they received was a letter from Major-General Musa Odinazoda, Deputy Chief of the Armed Forces General Staff, claiming that Bobojonov "committed a major crime by refusing to serve in the Armed Forces".

Officials such as Sugd Regional Military Prosecutor Abdukodyr Nurov refused on 10 January 2020 to give any legal grounds to Forum 18 as to why Bobojonov was arrested and taken to a military unit. Asked why Tajikistan will not pass an alternative service law and ignores repeated UN Human Rights Committee recommendations to do so, Nurov shouted "Who are you and why should I answer you?" before putting the phone down.

On 28 January 2020, Dushanbe's Military Prosecutor's Office opened the case against Bobojonov under Criminal Code Article 376, Part 2 ("Refusal to perform military service duties with the purpose of evading it completely"). The punishment for this is a prison term of between two and five years.

The Defence Ministry gave Bobojonov "the option to serve in a special battalion, where they do not take up arms but do construction work," Investigator Ibrahimzoda claimed to Forum 18 on 26 February. "He refused this, which is why a criminal case was opened." Told that the service Bobojonov was offered is still military and not civilian service, Ibrahimzoda replied: "We do not have a law on civilian service."

Ibrohimzoda of Dushanbe's Military Prosecutor's Office refused to answer when asked why Tajikistan is not implementing its binding international obligations, and why the authorities pursue prosecutions and imprisonments instead of finding amicable solutions before a law is adopted. "I cannot speak for higher authorities who are responsible for adopting laws", he replied.

Ibrohimzoda also refused to comment when asked whether the minimum two year jail term for conscientious objection is severe. "I cannot do anything about it," he replied.

Transferred to Investigation Prison in Dushanbe

On 28 January, after nearly four months' custody from October 2019 in military unit 45075, Bobojonov was transferred to Dushanbe's Investigation Prison: 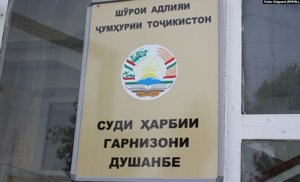 Asked about the case, the Court referred Forum 18 on 26 February to Anusherovon Khakanzoda, Chief of the General Section. Khakanzoda referred Forum 18 to Judge Sharifzoda when asked why a criminal case was opened and why arrest restraint was ordered. "She only ordered the arrest, and she did not open the case." He did not further wish to discuss the case with Forum 18.

Asked why Judge Sharifzoda ordered Bobojonov to be held in pre-trial detention, Davlatov responded: "Because the case is serious and the Judge had all the reasons to give the order."

Judge's Assistant Davlatov refused to explain why Bobojonov is being detained and prosecuted for being a member of a religious community that rejects military service. "if you want to find out why you can come to the Court in one week and you will see why." One week would be on or around Wednesday 4 March.

Davlatov also told Forum 18 that the criminal case is close to completion, indicating that Bobojonov's trial at Dushanbe Military Court is now close. Davlatov did not wish to discuss the case further.

"Jovidon Bobojonov has become emotionally and physically exhausted since the time he was forcefully kidnapped from his home by military officers on 4 October 2019," Jehovah's Witnesses complained.

Bobojonov's mother was able to visit her son on 22 February. "Jovidon's lawyer is allowed to visit him at any time," Jehovah's Witnesses told Forum 18. "His friends were given an opportunity to support him by passing some basic groceries."

"Although Jovidon did not complain of ill-treatment, we still do not have reliable information about how he is treated in the isolation ward," Jehovah's Witnesses added. "Unfortunately, he doesn't have a Bible. We do not know whether he did not take his Bible or the prison authorities do not allow one." (END)