On 28 February, two days after his arrest, a court in the northern city of Khujand ordered that 68-year old Jehovah's Witness Shamil Khakimov be held in pre-trial detention for up to two months. Prosecutors are preparing a criminal case against him on charges of "inciting religious hatred", charges he rejects. Khakimov, who suffers from high blood pressure and recently underwent a leg operation, faces between five and ten years' imprisonment if eventually tried and convicted. 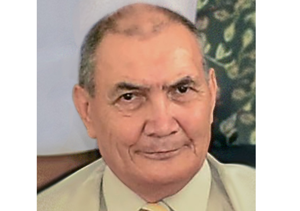 Shamil Khakimov
Jehovah's Witnesses
Judge Abruniso Mirasilzoda, who acceded to the Prosecutor's Office request to put Khakimov in pre-trial detention despite his medical condition, refused to explain her decision to Forum 18 (see below).

A panel of three judges at Sugd Regional Court upheld Khakimov's pre-trial detention on 12 March. None of the judges were prepared to discuss with Forum 18 why they approved the detention of the 68-year-old, given his serious state of health (see below).

Forum 18 was unable to reach Nosirkhuja Dodokhonzoda, Investigator of serious crimes at Sugd Regional Prosecutor's Office, who is leading the criminal case against Khakimov (see below).

Police opened the case against Khakimov after widespread raids in January and February on homes and police interrogations of Jehovah's Witnesses across the northern Sugd Region. Some of the interrogations involved torture.

Police Department for the Struggle with Organised Crime officers seized Khakimov's Bible and other religious literature during a raid on his home after they interrogated him (see below).

Jehovah's Witnesses in Khujand are still being regularly summoned and questioned by the police Department for the Struggle with Organised Crime, Jehovah's Witnesses complained to Forum 18. The Police summon individuals for interrogation "without written notifications".

Trouble began for Jehovah's Witness Shamil Rasulovich Khakimov (born 30 January 1951), a retired widower, after police stopped two Jehovah's Witnesses on the street in Khujand in early January for sharing their beliefs with a passer-by.

On the evening of 28 January, Khakimov received a call from an unknown person. "The caller requested him to leave his flat and come out onto the street. It was dark so he hesitated, but the calls kept coming," Jehovah's Witnesses said. "When he decided to come outside, there was no one on the street."

Later the caller identified himself as Nekruz Ibrokhimzoda from the Sugd Region Police Department for the Struggle with Organised Crime.

The next day, 29 January, police Department for the Struggle with Organised Crime officers summoned some of Khakimov's friends (who are not Jehovah's Witnesses) and fellow believers, and questioned them about him.

At lunch time on 1 February, three days after this, the police Department for the Struggle with Organised Crime's Khujand office summoned Khakimov, where officers searched him on arrival. Lieutenant Colonel Sukhrob Rustamzoda then interrogated him, including about his personal history, how he became a Jehovah's Witness, and the structure of the organisation.

"During the interrogation, officers refused to allow Khakimov to use the services of a defence lawyer," Jehovah's Witnesses complained.

Investigator Rustamzoda refused to comment on the case. "I cannot discuss it with you over the phone," he told Forum 18 on 19 March. "You need to talk to Sugd Regional Prosecutor's Office. They are investigating the case now." When Forum 18 insisted, asking why Police opened a case against Khakimov and why he was refused a defence lawyer to participate during his interrogation, Rustamzoda put the phone down.

After the interrogation, the police Department for the Struggle with Organised Crime brought Khakimov to his flat in Khujand. Officers seized his tablet device, laptop computer, his Bible and several religious books and brochures, as well as his passport. Officers did not give him a copy of the seizure record, Jehovah's Witnesses said.

The Police "detained him overall for eight hours the same day," Jehovah's Witnesses complained to Forum 18. "He had not fully recovered after the thrombophlebitis surgery on his legs and his bandages needed to be changed."

Moreover, Khakimov "could not receive money transfers to continue his necessary medical treatment, since officers seized his passport".

On 3 February, Khakimov filed a complaint with the Regional Prosecutor's Office against the actions of police Department for the Struggle with Organised Crime officers. "No answer has been received to this day," Jehovah's Witnesses complained to Forum 18.

"Instead at around 9 am on 7 February, four days after his complaint, police Department for the Struggle with Organised Crime officers once again arrived at Khakimov's home. They threatened him to open the door," Jehovah's Witnesses told Forum 18. "As the Police officers refused to provide the official summons, he decided not to open the door."

During the same day, the Police "repeatedly called Khakimov demanding him to come to the police station."

The Prosecutor's Office has "not responded to this complaint to this day either". 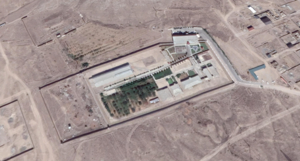 Khujand Investigation Prison
Google/DigitalGlobe
On 26 February, 19 days after his second complaint, Police arrested Khakimov and put him in custody "despite his advanced age and poor health".

The following day, on 27 February, the police Department for the Struggle with Organised Crime went to Khakimov's flat again. "Without showing identification documents - in the absence of Khakimov and the presence of his roommate - seized Khakimov's international passport without drawing up a record of it," Jehovah's Witnesses said.

On 28 February, at the request of Sugd Regional Prosecutor's Office, Judge Abruniso Mirasilzoda of Khujand City Court ordered that Khakimov be held in pre-trial detention. He is being held in the Investigation Prison in Khujand.

Judge Mirasilzoda told Forum 18 from the court on 19 March that "his custody may last up two months while the investigation proceeds, and if need be his arrest can be prolonged." She refused to explain why Khakimov needs to be held in custody. Asked why he cannot be at home while his case is being investigated, she told Forum 18: "I gave my decision, and it entered into force."

Asked why she did not take into account that Khakimov is an old man who recently underwent an operation on his leg, Judge Mirasilzoda replied: "His lawyer informed us about this orally, but did not present documents." Asked whether had Khakimov had the documents, she would not have ordered the pre-trial detention, she responded: "I do not want to discuss my decision further."

Jehovah's Witnesses say the court was fully aware of Khakimov's medical condition. "On 28 February our lawyer did not yet have the documents from the doctors on Khakimov's operation, so they told Judge Mirasilzoda that Khakimov can open the bandage on his leg and show the wound, as well as producing the documents later. But she went ahead with her decision."

Jehovah's Witnesses appealed against the 28 February decision to place Khakimov in pre-trial detention. They presented in court documentation on his operation and health condition. But on 12 March, a panel of three judges at Sugd Regional Court, Ismoil Rakhmatzoda, Maftuna Rakhmatillozoda and Khotamsho Sattorzoda, upheld Khakimov's pre-trial detention.

Asked on 20 March why the Court upheld the pre-trial detention of Khakimov, an ailing old man, Makhrambek Jumazoda, Secretary of Judge Rakhmatzoda, took down the question and Forum 18's name. Then, after consulting with an official in Judge Rakhmatzoda's office, claimed to Forum 18 that the Judge is "busy in a meeting". He then refused to talk further.

Judge Rakhmatillozoda on 20 March also refused to explain their decision. Asked why the Court did not take into account the official records of Khakimov's condition and upheld his pre-trial detention, she responded: "I just came into my office. Can you call back in 15 minutes?" Called back later, she told Forum 18 "I cannot talk to you," and put the phone down.

Nosirkhuja Dodokhonzoda, Investigator of serious crimes at Sugd Regional Prosecutor's Office, is leading the case against Khakimov. On 7 March, one week after Khakimov's arrest, Dodokhonzoda officially informed him of the charges against him.

Dodokhonzoda is investigating Khakimov under Criminal Code Article 189, Part 2 ("Inciting national, racial, local or religious hatred or dissension, humiliation of national dignity, as well as propaganda of the superiority of citizens based on their religion, national, racial, or local origin, if committed in public or using the mass media" when performed repeatedly, by a group or by an individual using their official position). Punishment is imprisonment of between five and ten years, with the possibility also of a five-year ban on specified activity.

Prisoner of conscience Pastor Bakhrom Kholmatov, who led a Protestant Church in Khujand, was punished under Criminal Code Article 189, Part 1 for allegedly "singing extremist songs in church and so inciting 'religious hatred'". Khujand City Court sentenced him to three years' imprisonment in July 2017.

Asked why the Prosecutor's Office asked for Khakimov's pre-trial detention, and why it did not respond to Khakimov complaints on the Police illegal actions, the official (who did not give his name) who on 19 March answered the phone of Khobibullo Vokhidov, Prosecutor of Sugd Region, took down Forum 18's name and asked it to wait on the line. Moments later, he told Forum 18 that "Prosecutor Vokhidov is busy; call back in an hour or so."

Called back later, the Prosecutor's phone numbers were all switched to a fax machine.

Prosecutor's Office Investigator Dodokhonzoda did not answer his phones on 20 March.

Jehovah's Witnesses added that although Khakimov is "doing well", he still feels pain in his leg after the surgery. "Our lawyer talked to the prison doctor and he said that he will make sure that Shamil Khakimov would not have to stand up every time officers enter the cell for checking."

The Sugd Region police Department for the Struggle with Organised Crime interrogated about 17 Jehovah's Witnesses for periods of up to 14 hours in January and February across the northern Sugd Region, including in Khujand and Konibodom. Police also confiscated mobile phones, personal computers or tablets, and internal passports from those they interrogated.

One female Jehovah's Witness was interrogated two days running for 14 hours. Because of the extreme stress imposed on her, she suffered a stroke, leaving her unable to walk or speak. She was then taken to hospital.

"After the female Witness complained to President Emomali Rahmon, Sugd Regional Police informed her in writing on 6 March that it is investigating the complaint," Jehovah's Witnesses told Forum 18. "However, she has not been informed on the course or the results of the investigation to this day."

Asked on 20 March about the investigation of this case and Khakimov's case, officials at the General Prosecutor's Office reception (who did not give their names) referred Forum 18 to its international relations section's Makhmudzoda and Karimzoda (first names were not given). The officials' phones went unanswered the same day. Called back, the reception officials refused to put Forum 18 through to any other officials to discuss the cases. (END)