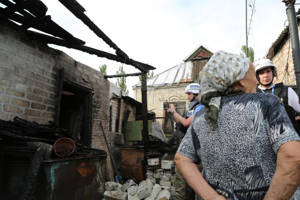 OSCE monitors in Donetsk, 20 July 2017
OSCE/Mariia Aleksevych/Flickr [CC BY-NC-ND 2.0]
Pressure on Jehovah's Witnesses from police and State Security Ministry secret police stepped up from 2017, with raids on communities, seizures of literature and community documents, and threats not to meet for worship. Authorities have also "systematically seized" Kingdom Halls, with nine confiscated in 2017 alone. The authorities "use the pretext of fighting extremism to persecute Jehovah's Witnesses for their peaceful worship", Jehovah's Witnesses complained to Forum 18 (see below).

As well as the accusation of "extremism" in its Supreme Court suit, the General Prosecutor's Office accused Jehovah's Witnesses of not having local registration. However, Culture Ministry and Justice Ministry officials told Forum 18 that no religious communities (apart from the two Moscow Patriarchate dioceses) currently have registration. An amendment to the Religion Law gives religious communities until 1 March 2019 to lodge registration applications (see below).

In 2016 the Supreme Court also declared three Muslim booklets "extremist" in a decision which could not be challenged. Four websites with the text of one of the booklets were banned the following year (see below).

The Supreme Court refused to put Forum 18 through to Judge Liliya Reznikova, who heads the Court's civil division and who presided over all the banning decisions, to find out why she and her colleagues approved the bans (see below).

Asked what would happen if Jehovah's Witnesses continue to meet for worship after the ban, given the warning that they face "criminal responsibility", the duty officer at the State Security Ministry said he did not know. "Where are they meeting?" he asked Forum 18 (see below).

The moves to criminalise the exercise of the right of Jehovah's Witnesses to exercise freedom of religion or belief mirror those in neighbouring Russia, which supports the rebel Donetsk authorities. Russian courts declared many Jehovah's Witness publications "extremist" and they were banned. Then, in 2017, Russia's Supreme Court banned the entire community as "extremist". Now over 80 Jehovah's Witnesses face criminal prosecution for alleged "extremist" activity (see F18News 13 September 2018 http://www.forum18.org/archive.php?article_id=2412).

The rebel Donetsk authorities are increasingly seizing or sealing places of worship to prevent communities from meeting. As well as Jehovah's Witness Kingdom Halls, Mormon churches, a mosque, a Seventh-day Adventist church and a Baptist church are among those seized or sealed (see F18News 12 October 2018 http://www.forum18.org/archive.php?article_id=2422).

On 26 September a panel of three judges under presiding Judge Liliya Reznikova at the rebels' Supreme Court in Donetsk banned all Jehovah's Witness activity "in connection with the carrying out of extremist activity", according to the decision seen by Forum 18. The suit had been brought by the then acting General Prosecutor Andrei Spivak (now the General Prosecutor).

However, the first of the prosecutors' complaints was that groups of Jehovah's Witnesses were allegedly meeting without making themselves known to the authorities and being put on a register.

The prosecutors then complained that community members were distributing literature "inciting religious discord and propagandising the exclusivity, superiority and inadequacy of individuals based on their religious affiliation".

Prosecutors then alleged that Jehovah's Witnesses' rejection of blood transfusions, "even in life-threatening situations", testifies to "this religious community's carrying out of extremist activity, creating a real threat of causing harm to the health of individuals, personality, public order, society and the state".

The Court decision claims that, in their rejection of blood transfusions, Jehovah's Witnesses cite Old Testament passages "which have no relation at all to the given restriction". The Court decision gives no source for this interpretation of Biblical passages, or why it might be relevant to the case.

The rebels' State Security Ministry (SSM), in a 16 July letter, noted that the Jehovah's Witness headquarters near Lviv in Ukraine does not have its own printing press and therefore imports all its publications "with subsequent transport to the Donetsk People's Republic". The SSM claimed that local Jehovah's Witnesses share these publications not only among their adherents but among people more widely "in an open, persistent way".

Forum 18 was unable to find out why General Prosecutor Spivak chose to bring the banning suit to court. The General Prosecutor's Office in Donetsk refused to put Forum 18 through to him. "We don't give out phone numbers," the duty prosecutor told Forum 18 on 1 November. "Come to his office during the reception hours."

Jehovah's Witnesses told Forum 18 after the decision that it was not a surprise, given the earlier raids on their communities, bans on literature and their website, and hostility from local officials.

On 26 September – the same day the Supreme Court banned Jehovah's Witnesses – an announcement on the General Prosecutor's Office website highlighted the ban. "In future, the carrying out of activity by adherents of the given religious association in any form will attract criminal responsibility," it added.

The announcement did not say which Criminal Code Article Jehovah's Witnesses exercising their right to freedom of religion or belief would be punished under.

The duty prosecutor at the General Prosecutor's Office refused to explain to Forum 18 what punishments Jehovah's Witnesses could expect and why.

On 22 August, the Supreme Court declared the Jehovah's Witnesses' main international website jw.org "extremist" and banned it, according to court information. The same decision banned two other of their religious publications, bringing to 13 the number banned as "extremist".

The Supreme Court refused to give Forum 18 the 22 August written decision.

In four separate decisions from July 2017 to March 2018, the Supreme Court declared 11 Jehovah's Witness publications "extremist". The 15 March 2018 decision banned four past issues of the Witnesses' religious magazine, "The Watchtower".

The Justice Ministry's online list of banned "extremist literature", as of 2 November, includes 12 Jehovah's Witness items: the jw.org website, five magazines, three books and three booklets. The list does not include the two other Jehovah's Witness publications the Supreme Court banned on 22 August alongside the website.

On 20 July 2016, the Supreme Court under presiding Judge Reznikova banned three Muslim booklets published by the Donbas Muftiate, according to the decision seen by Forum 18. Like all the other Supreme Court banning decisions, it too could not be challenged.

The acting General Prosecutor brought the suit, insisting that the booklets – "Islam – the Religion of All the Prophets", "Prophets" and "Jesus, Peace Be Upon Him, in Islam" – were "extremist". The decision ordered that any undistributed copies of the booklets should be confiscated. It did not say whether or not they would be destroyed.

On 3 February 2017, Judge Reznikova and two other Judges at the Supreme Court banned four websites where "Jesus, Peace Be Upon Him, in Islam" had been posted, according to the decision seen by Forum 18.

When State Security Ministry officers raided and closed down Al-Amal Mosque in Donetsk's Kalinin District in June 2018, they seized religious literature which they claimed was "extremist". Among the books officers seized, the Ministry identified two: "Fortress of a Muslim", a collection of Muslim prayers which, as it noted, is banned in Russia; and "The Last Journey", a book published by the Ukrainian Muslim organisation Al-Raid and which has also been declared "extremist" in Russia. Neither has been declared "extremist" by Donetsk's Supreme Court (see F18News 12 October 2018 http://www.forum18.org/archive.php?article_id=2422).

In August 2017, prosecutors began issuing written warnings to Jehovah's Witnesses, Jehovah's Witnesses told Forum 18. They advised them not to distribute their literature, as distribution is prohibited and makes individuals administrative¬ly liable.

In August 2017, prosecutor's offices in Novoazovsk and Debaltsevo issued warning letters to local Jehovah's Witnesses, directing them not to distribute "Awake!" and "The Watchtower" magazines without first obtaining a permit. On 1 September 2017, the Prosecutor's Office in the city of Makeyevka issued a similar warning to local Jehovah's Witnesses.

"In this way the authorities obstruct distribution even of religious materials not declared extremist and threaten to hold congregation elders liable for any of the Witnesses' literature that is distributed," Jehovah's Witnesses complained.

The rebels' People's Council adopted a Religion Law on 24 June 2016. Article 3 included a ban on "the creation of sects or the spreading of sectarianism", concepts that the Law does not define.

The Law does not explicitly ban exercising freedom of religion or belief without official permission. However, in outlining procedures for gaining state permission it presumes that such permission is required.

On 13 April 2018, the People's Council adopted an amendment to the Religion Law requiring all non-Moscow Patriarchate organisations to re-register by 1 March 2019. The amendment specifically banned religious organisations from functioning if they failed to get re-registration by the deadline.

Baptists elsewhere in Ukraine expressed concern about their fellow church members in rebel-held areas. "At present, no Protestant religious organisation is known to have got registration," they told Forum 18. "The list of required documents and the conditions for submitting them change constantly."

Baptists added that the leaders of religious organisations seeking registration "must not have links with Ukraine and must be loyal to the local authorities".

An official of the Justice Ministry Department for Work with Non-Commercial Organisations in Donetsk said that the Culture Ministry takes all decisions on whether or not to register a religious community. "They take the decision and send it to us," he told Forum 18 on 2 November. "So far the Culture Ministry have not sent us any decisions." He confirmed that only the two Moscow Patriarchate dioceses currently have legal status.

Sergei Gavrish, the head of the Religion and Nationalities Department at the Culture Ministry in Donetsk, told Forum 18 on 11 October that some religious communities have lodged registration applications and "some are being processed". He refused to say who they were from or how many there were. He stressed that communities have until 1 March 2019 to submit their applications.

Representatives of a wide range of religious communities of different faiths based outside rebel-held areas of Donetsk Region declined to discuss with Forum 18 the situation for their communities. (END)

Reports on freedom of thought, conscience and belief in Donbas can be found at http://www.forum18.org/Archive.php?query=&religion=all&country=87.