For the second time in 2018, an Azerbaijani court has given a young conscientious objector a criminal conviction for refusing to perform compulsory military service. Agdam District Court handed 19-year-old Vahid Abilov a one-year suspended prison term on 6 September, and he will be under probation for one year. He is planning to appeal against his conviction. 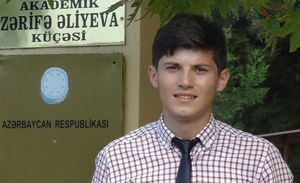 Abilov's conviction came exactly two months after another court in western Azerbaijan convicted another conscientious objector Emil Mehdiyev. He too was given a one-year suspended prison term and will have to live under probation for one year. His appeal against his conviction is due to be heard at Ganca Appeal Court on 24 September (see below).

The cases of three other Jehovah's Witness young men who similarly refused military service on grounds of conscience have been handed to prosecutors or are being considered. A Prosecutor's Office in Qakh insisted that it will not launch a criminal case against the conscientious objector there (see below).

The Office of the government's Human Rights Ombudsperson claimed to Forum 18 that she has urged the "speeding up" of the adoption of an alternative to military service. However, she does not appear to have taken up the cases of Abilov or Mehdiyev (see below).

In May, Jehovah's Witnesses discussed with a senior official of the State Committee for Work with Religious Organisations in Baku the plight of their young men who cannot perform military service on grounds of conscience. However, the discussion did not resolve the problem (see below).

Ahead of its accession in January 2001 to the Council of Europe, Azerbaijan formally promised "to adopt, within two years of accession, a law on alternative service in compliance with European standards and, in the meantime, to pardon all conscientious objectors presently serving prison terms or serving in disciplinary battalions, allowing them instead to choose (when the law on alternative service has come into force) to perform non-armed military service or alternative civilian service".

Azerbaijan has never adopted such a law or introduced any civilian alternative to military service, despite calls by the Council of Europe and the United Nations. Five Jehovah's Witnesses punished through the courts between 2007 and 2013 for refusing compulsory military service are awaiting decisions in their appeals to the European Court of Human Rights (ECtHR) in Strasbourg. Azerbaijan is subject to the ECtHR's decisions as a member of the Council of Europe (see F18News 29 August 2018 http://www.forum18.org/archive.php?article_id=2408).

With no alternative to compulsory military service for young men, conscientious objectors face prosecution under Criminal Code Article 321.1. This states: "Evasion without lawful grounds of call-up to military service or of mobilisation, with the purpose of evading serving in the military, is punishable by imprisonment for up to two years [in peacetime]" (see Forum 18's Azerbaijan religious freedom survey http://www.forum18.org/archive.php?article_id=2081).

The Office of the government's Human Rights Ombudsperson claimed to Forum 18 on 5 September that in her annual reports, Elmira Suleymanova had "proposed speeding up the adoption of the relevant law" to allow for an alternative to military service.

Asked what Ombudsperson Suleymanova had done to defend the rights of those prosecuted for refusing military service on grounds of conscience, such as Emil Mehdiyev, the Ombudsperson's Office responded that it was unable to take up cases which were still pending before a court. It stressed that Mehdiyev had been given a suspended sentence and had not been jailed.

The response did not explain why Mehdiyev should have faced prosecution at all for exercising his internationally-recognised right to opt out of military service on grounds of conscience.

On 12 September, Forum 18 mentioned to the Ombudsperson's Office the criminal conviction of Vahid Abilov. It received no response.

In 2018 the Sub-Committee on Accreditation of the Global Alliance of National Human Rights Institutions downgraded the Azerbaijani Ombudsperson's Office to B status because it "has not adequately spoken out in a manner that effectively promotes protection for all human rights, including in response to credible allegations of human rights violations having been committed by government authorities" (see F18News 29 August 2018 http://www.forum18.org/archive.php?article_id=2408).

A local and two visiting foreign Jehovah's Witnesses raised the lack of an alternative civilian service and the prosecution of conscientious objectors at a meeting in Baku on 3 May with Sayavush Heydarov, one of the Deputy Heads of the State Committee for Work with Religious Organisations. The State Committee account of the meeting on its website the same day made no mention of the Jehovah's Witness concerns over the lack of alternative civilian service and the prosecutions.

Jehovah's Witness Vahid Gunduz oglu Abilov (born 2 May 1999) was called up for compulsory military service in 2017, when he reached the age of 18.

As requested, on 12 March, Abilov reported to Investigator Rashad Gulmammadli from the Prosecutor's Office and explained his reasons for refusing military service based on his religious beliefs.

Abilov was later notified that a criminal case had been initiated against him. On 9 July, he was indicted under the charge of evading military service under Criminal Code Article 321.1. His case was handed to Agdam District Court. The court is in the town of Quzanli, as the town of Agdam itself is controlled by the unrecognised region of Nagorno-Karabakh. This is a frontline area which sees intermittent fighting.

At his trial on 6 September, Abilov's lawyer filed a motion to terminate the criminal proceedings. However, Judge Mahir Niftaliyev rejected the motion. That same day, the Judge convicted Abilov under Criminal Code Article 321.1 and handed him a one-year suspended prison term, and required that he live under probation for one year.

"During the whole time Abilov repeatedly verbally and in written form explained his religious position," Jehovah's Witnesses told Forum 18. "Vahid Abilov is going to file an appeal against the unlawful verdict of Agdam District Court." Any appeal would be heard at Ganca Appeal Court.

Telephones at Agdam District Court went unanswered each time Forum 18 called on 18 September. Ganca Appeal Court told Forum 18 on 18 September that it has received no appeal from Abilov.

Forum 18 tried to reach Investigator Gulmammadli at Agdam Prosecutor's Office or its head, Rafayil Zeynalov. However, officials said on 17 September that both were out of the office, Gulmammadli on a work trip and Zeynalov at a meeting.

The first conscientious objector given a criminal conviction in 2018 is awaiting his appeal against his conviction. Judge Alizamin Abdullayev of Ganca Appeal Court is due to hear the appeal by 18-year-old Emil Mehdiyev on the morning of 24 September, Jehovah's Witnesses told Forum 18.

After his call-up for military service in December 2017, Mehdiyev repeatedly told the Conscription Office he could not perform military service on grounds of conscience and was willing to perform an alternative civilian service.

Will other prosecutions reach court?

On 7 January 2015, Baku-based Jehovah's Witness Emin Tahmazov sent his statement to Baku's Khatai District Conscription Office explaining his conscientious objection to military service. He provided another statement on 10 January 2018 that explained his beliefs in more detail. In response to a summons, he met Chief Mehman Qurbanov on 14 June, Jehovah's Witnesses told Forum 18.

Qurbanov told Tahmazov that his statement had been considered, that the judgments of the ECtHR in Strasbourg did not apply to him and that he must perform military service.

On 21 June, Tahmazov filed his statement to the Conscription Office again. On 25 June, officials told him he had been assigned to a military unit. Tahmazov provided his written statement for the fourth time on 9 July and again requested alternative civilian service. Officials told him that his case would be sent to the Prosecutor's Office.

The official who answered the phone at Khatai District Conscription Office on 18 September said Qurbanov was not in the office. He refused to put Forum 18 through to anyone else.

On 24 July, Otarashvili returned to the Conscription Office and met the Deputy Chief. He confirmed that his religious position had not changed and wrote another statement. On 25 July, Otarashvili again went to the Conscription Office, reaffirmed that his position had not changed and repeated his request for alternative service. The chief said he had no choice but to refer the case to the Prosecutor's Office.

An inspector of Qakh District Conscription Office – who did not give his name – confirmed to Forum 18 on 18 September that Otarashvili's case had been handed to Qakh District Prosecutor's Office. Asked why, given that Otarashvili had repeatedly declared his readiness to do alternative civilian service, the inspector responded: "Because he doesn't want to serve [in the army]. We don't have alternative service."

An official of Qakh District Prosecutor's Office confirmed to Forum 18 on 18 September that it had received materials about Otarashvili from the Conscription Office. However, the official – who did not give his name – stressed that no investigation was underway. "Don't worry, we'll deal with this objectively," the official told Forum 18. "There won't be a criminal case."

On 24 July, Hasanaliyev returned to the Conscription Office and met the Chief, who offered him non-combat duties in the military. Hasanaliyev refused and requested alternative civilian service instead. The Chief replied that there is no provision for this in Azerbaijan and that he would transfer Hasanaliyev's case to higher officials for consideration. (END)