On Sunday 15 May, Polish priest Fr Andrzej Stopyra celebrated his last Mass before his enforced departure from his parish in Lida District of western Belarus where he had been serving for a quarter of a century. One parishioner told Forum 18 that Fr Stopyra had been expecting such a refusal for at least five years before he received the document banning his further service in Belarus, signed by the government's Plenipotentiary for Religious and Ethnic Affairs, Leonid Gulyako. Along with permission to conduct religious activities, the priest was also denied a residence permit. Fr Stopyra and his parish are the latest victims of the authorities' policy of reducing the number of foreign Catholic priests serving in Belarus, by denying visas or refusing to extend permission to continue religious activities. 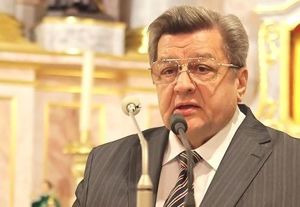 Leonid Gulyako, 21 October 2014
Alyaksandra Shchyglinskaya/Catholic.by
The denial came as another Catholic priest - Fr James Manjackal from India, invited to conduct spiritual exercises over several days in July - was denied state permission for his religious visit to the country.

Quarter of a century's service ended

Fr Stopyra had served as priest of Descent of the Holy Spirit parish in the small town of Biarozauka (Berezovka) in Grodno [Hrodna] diocese since 1991. The parishioner, who asked not to be identified, complained to Forum 18 on 17 June that church members were upset over having to part with Fr Stopyra and hoped to the last that the denial of permission to remain would be overturned. The priest preferred to leave quietly without making a fuss, the parishioner added.

"Foreign priests need to get permission to serve in Belarus," Fr Pavel Solobuda, spokesman for Grodno Catholic diocese, told religious news agency Krynica.info on 16 May. "The time came for him [Fr Stopyra] to obtain his permission for further work. But he was refused. And the reasons may have been explained only to him. As far as I understand, the reasons are not given to the public."

Forum 18 was unable to find out from the office of the government's Plenipotentiary for Religious and Ethnic Affairs why it had denied the right of Biarozauka's Catholic parishioners to continue to have Fr Stopyra as their priest. As soon as Forum 18 asked in repeated calls on 20 and 21 June why Fr Stopyra had been denied permission to continue serving in his parish, Deputy Plenipotentiary Yelena Radchenko claimed she could not hear and put the phone down.

The Deputy Head of the religious affairs sector of Grodno Region Executive Committee Vladimir Skripko absolutely refused to answer any of Forum 18's questions on 21 June, including whether the decision to ban Fr Stopyra from further service was taken in Grodno or Minsk. He then put the phone down.

Spokesman of the Catholic Bishops' Conference, Fr Yury Sanko, confirmed to Forum 18 that Fr Stopyra has left the country. "I don't know whether it was his wish, but he has left Belarus," he told Forum 18 on 3 June. Back in his native Poland, Fr Stopyra is serving as dean of St Stanislaw parish in Lubaczow, according to the diocesan website.

The spokesman of Grodno diocese, Fr Solobuda, confirmed to Forum 18 on 7 June that Fr Stopyra's replacement in Biarozauka is a Belarusian priest.

Asked why the Biarozauka congregation had not stood up for the priest and sent petitions to the authorities, Fr Solobuda remarked: "It's difficult to say. People come to the church to God and not to the priest." He added that Fr Stopyra had done "a lot of good things, so there's no place for grief".

The denial of permission for Fr Stopyra to continue to serve at the invitation of the Church is the latest in a series of state obstructions to Catholic clergy. The state barred Polish citizen Fr Roman Schulz from continuing his religious work in April 2014 after serving seven years in St Kazimir and Yadviga Church in Mogilev, although permission was eventually extended (see F18News 20 February 2015 http://www.forum18.org/archive.php?article_id=2040). Fr Schulz is still serving in the Mogilev parish.

In December 2015, two Catholic priests from Poland invited by the Church to work in Minsk-Mogilev [Mahilyow] Archdiocese were not given permission to come to serve in Belarus without any explanations (see F18News 14 March 2016 http://www.forum18.org/archive.php?article_id=2157).

No permission for religious visit

A Catholic priest from India, Fr James Manjackal, was denied permission to come to Belarus for spiritual exercises he was due to lead in the Catholic parish in Ross in Volkovysk District of Grodno Region from 22 to 24 July. Grodno diocese had requested permission for his visit, but the Plenipotentiary's Office had sent its rejection to the diocese in April.

Father Cheslau Pauliukievich, the dean of Ross's Holy Trinity parish, told Forum 18 on 29 June that he had hosted the priest for spiritual exercises twice before without any obstacles. More than 5,000 Catholics had attended the exercises, including Grodno Bishop Aleksandr Kashkevich.

The spokesman of Grodno diocese, Fr Solobuda, told Forum 18 on 3 June that the denial of permission to Fr Manjackal was unexpected. "He came to Belarus last year without any problems. This time no reasons were ever explained to us," Fr Solobuda complained.

Forum 18 was unable to find out from the Plenipotentiary's Office in the capital Minsk why it had denied permission for Fr Manjackal's visit. The Deputy Head of the religious affairs sector of Grodno Region Executive Committee Skripko put the phone down when Forum 18 called him.

Fr Solobuda is hopeful that next year a new application will be accepted and Fr Manjackal will obtain permission to return to Belarus.

No reason needed for denial

Under a January 2008 Council of Ministers Decree, amended in July 2010, the religious activities of foreign citizens invited for religious purposes are regulated by the Plenipotentiary for Religious and Ethnic Affairs, who is entitled to grant permission to stay in Belarus and permission to conduct religious activities. He may refuse a foreign religious worker's visit without giving any reason. Foreign citizens must also demonstrate knowledge of Belarus' state languages (Belarusian and Russian) in order to perform religious work. The Plenipotentiary defines the period of permission, has the right to shorten it and is not obliged to communicate the reasons for a refusal (see F18News 12 June 2014 http://www.forum18.org/archive.php?article_id=1969).

The authorities use this Decree as an instrument to reduce the number of foreign priests. Two years in a row, Plenipotentiary Gulyako criticised Polish Catholic priests for allegedly violating visa regulations, involvement in politics and lack of knowledge of the Belarusian language (see F18News 20 February 2015 http://www.forum18.org/archive.php?article_id=2040 and F18News 14 March 2016 http://www.forum18.org/archive.php?article_id=2157).

Foreign religious personnel of any faith are under tight state restrictions while working in Belarus. The transfer of a foreign religious worker from one religious organisation to another - such as between parishes of the same denomination - requires permission from a state official dealing with religious affairs, even to conduct a single worship service (see Forum 18's Belarus religious freedom survey http://www.forum18.org/archive.php?article_id=1997).

According to Minsk-based lawyer and human rights defender Dina Shavtsova, this regulation prevents a religious organisation from choosing its religious leaders freely. She pointed out to Forum 18 that Belarus is required to meet commitments under the Organization for Security and Co-operation in Europe (OSCE) Concluding Act of the Third Follow-up Meeting in Vienna in 1989, where the participating states reaffirmed to allow religious organisations to "organize themselves according to their own hierarchical and institutional structure" (principle 16.4).