BELARUS: Why does government still try to conscript conscientious objectors?

Belarus' Rechitsa Military Conscription Office is yet again trying to conscript 24-year-old Jehovah's Witness conscientious objector Dmitry Chorba for military service, Forum 18 News Service has learnt. The attempts continue despite past criminal and administrative charges against him being dropped and an Alternative Service Law coming into force in July 2016. Lieutenant Colonel Vladimir Osipov, who heads the Conscription Office, does not want conscientious objection to be "a habit" but has refused to explain to Forum 18 why he and his colleagues continue to try to conscript or punish Chorba. Yauhen Asiyeuski of For Alternative Civilian Service suggested to Forum 18 that Conscription Offices have a quota of young men they must conscript. In small towns like Rechitsa – in contrast to cities like Minsk - the number of young men of call-up age between 19 and 27 years old is limited, making every conscript valuable. However, Defence Ministry Spokesperson Colonel Vladimir Makarov denied to Forum 18 that Conscription Offices have a conscript quota. But officials seem to have no intention of halting attempts to conscript Chorba.

Chorba's latest summons to a medical examination at the Military Conscription Office came despite both criminal and administrative charges against him being dropped. The charges were dropped after what Chorba described as a "show trial" attended by potential conscripts.

Another Jehovah's Witness conscientious objector, Viktor Kalina in the western city of Brest, has also faced a "show trial" attended by potential conscripts and has similarly had criminal and administrative charges dropped (see F18News 24 September 2015 http://www.forum18.org/archive.php?article_id=2104).

The repeated summonses and cases against both conscientious objectors are despite the official adoption in June of Belarus' first-ever Alternative Service Law. This takes effect from 1 July 2016 and allows some, but not all, young men who are conscientious objectors to perform a civilian alternative service instead of compulsory military service. However, only young men with a religious objection will be eligible to apply, not those with non-religious pacifist convictions.

Despite the punitive nature of the Alternative Service Law compared to military conscription, Chorba has told the authorities that he is willing to do alternative civilian service (see F18News 20 July 2015 http://forum18.org/archive.php?article_id=2083), as has Kalina (see F18News 26 August 2015 http://www.forum18.org/archive.php?article_id=2094).

Officers don't want conscientious objection to be "a habit"

After Chorba's 25 September medical examination he was certified fit for military service, but he refused to sign the notification given to him of this, he told Forum 18 on 17 October. He has noticed that "local people in the military have behaved rudely towards me because I won the administrative case against being conscripted". They were also rude because of his pacifist Jehovah's Witness beliefs.

In Chorba's presence, Lieutenant Colonel Vladimir Osipov, who heads the Military Conscription Office, discussed on the phone how he can punish him, so that "in future conscientious objection doesn't become a habit".

Despite Chorba's repeated explanations to officers that his religious beliefs do not allow him to do military service, his winning legal cases and the Alternative Service Law, officials have shown no intention of dropping their attempts to conscript Chorba. Colonel Denis Nislovsky, Military Commissioner of Rechitsa Conscription Office, insisted in a letter to Chorba of 3 October – seen by Forum 18 – that "the second request [not to be conscripted] is ill-founded and further correspondence on the issue is terminated".

Chorba expects that the government will initiate more confrontation. "First I won't turn up at the assembly station, then they will formally ask the Investigation Committee to initiate proceedings under Criminal Code Article 435, Part 1," he commented to Forum 18.

This Article bans "Refusal of call-up to military service" with penalties of either a fine or up to two years' imprisonment. The government's last attempt to prosecute him on this charge ended when the Investigation Committee found that Chorba had committed no crime (see F18News 20 July 2015 http://www.forum18.org/archive.php?article_id=2083).

Conscientious objector Kalina was similarly charged under Article 435, Part 1, but was acquitted by Brest's Moscow District Court on 17 August (see F18News 24 September 2015 http://www.forum18.org/archive.php?article_id=2104). The Prosecutor appealed against the acquittal but Brest Regional Court turned down the appeal on 13 October, Kalina told Forum 18 on 22 October.

Both Colonel Nislovsky and Lieutenant Colonel Osipov have refused to explain to Forum 18 why they are so determined to try to conscript or punish Chorba. Between 19 and 26 October both officers either put the phone down or did not answer when Forum 18 called them at Rechitsa Military Conscription Office to ask this.

The Defence Ministry would not confirm this to Forum 18. Spokesperson Colonel Vladimir Makarov insisted on 27 October that "no indulgence will be made for conscientious objectors" before the Alternative Service Law comes into force on 1 July 2016.

Colonel Makarov noted however, that after the Law comes into force conscientious objectors will make requests for alternative civilian service to a Conscription Commission chaired by the Head of the Regional Executive Council, not to Military Conscription Offices (see F18News 18 June 2015 http://www.forum18.org/archive.php?article_id=2074).

Asiyeuski of For Alternative Civilian Service noted that Military Conscription Offices have a target for the number of conscripts they must send for military service. In small towns like Rechitsa the number of men of call-up age between 19 and 27 years old is limited, making every conscript valuable. "Nobody cares that he is a conscientious objector as the quota must fulfilled," Asiyeuski told Forum 18. However in Minsk the number of potential conscripts exceeds the quota, so not everyone eligible is called up.

Colonel Makarov of the Defence Ministry denied that Conscription Offices have a quota for conscripts. He told Forum 18 that all men between 18 and 27 without health problems are called up for military service. He explained however that, at present, laws and regulations are being adjusted to meet the requirements of the new Alternative Service Law.

How to be a conscientious objector

At present, those who object on grounds of conscience to swearing the military oath, doing military service with weapons, or both, are offered work either with the Railway Troops (who maintain and control railways) or in another non-combat capacity. Those who object to serving within the armed forces in any capacity under military control, such as Jehovah's Witnesses, are either exempted from service altogether or imprisoned (see Forum 18's Belarus religious freedom survey http://www.forum18.org/archive.php?article_id=1997).

However, conscientious objectors will be required to apply to a local Military Conscription Office for their requests for alternative service to be considered by a Conscription Commission (see F18News 18 June 2015 http://www.forum18.org/archive.php?article_id=2074).

"We'll keep taking a stand on this issue"

Human rights defenders, such as Asiyeuski of For Alternative Civilian Service, have strongly criticised the Alternative Service Law for not meeting international standards by restricting conscientious objection only to those from pacifist religious communities and for the punitive length of alternative service (see F18News 18 June 2015 http://www.forum18.org/archive.php?article_id=2074).

The Belarusian Autocephalous Orthodox Church's parish in the capital Minsk has abandoned attempts to gain state registration after US-based Archbishop Sviatoslav (Lohin) was denied entry to Belarus in late July, Fr Leonid Akalovich has told Forum 18 News Service. This is the first ban on a pastoral visit by the Archbishop. Fr Akalovich stressed that the Church would like to have legal status. Without registration it has to keep a low profile, as under the Religion Law, any exercise of the right to freedom of religion or belief without state approval is illegal. Officials have refused to explain to Forum 18 why they denied the Church registration and gave spurious reasons for this – including that the Church is allegedly new although its current statute was drafted in 1927. Also, Jehovah's Witness conscientious objector Dmitry Chorba still faces attempts to conscript him, despite both criminal and administrative charges being dropped. Another Jehovah's Witness conscientious objector, Viktor Kalina, was acquitted at his criminal trial. Both trials were before apparently selected audiences to deter other young men from refusing military service. 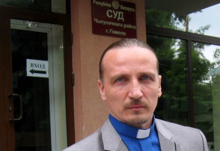 Although the Regional Court overturned an earlier fine for leading a meeting for worship, the same lower court in Gomel [Homyel] in south-east Belarus has imposed the same fine of more than two weeks' average local wages on Pastor Sergei Nikolaenko of the Reformed Orthodox Transfiguration Church. He again submitted an appeal to the Regional Court on 1 September, he told Forum 18 News Service. Pastor Nikolaenko and another church member were given "official warnings" that if they violate the law by holding meetings to worship without state permission they will face criminal prosecution, with possible prison terms of up to three years. Aleksandr Gorlenko, the official who drafted the written ban on the Church's meetings, refused to discuss it. "All the reasons were explained to the leader of the church," he told Forum 18. Also, ten Baptists from Soligorsk have failed to overturn fines imposed after armed police raided their meeting for worship.