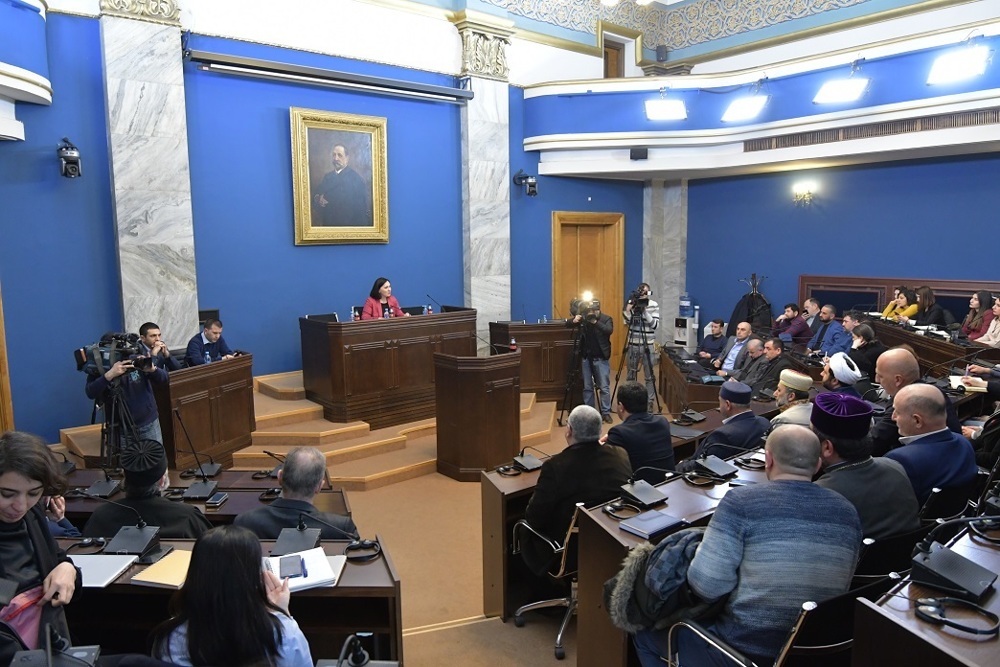 Since late May, mobs of non-Muslims have obstructed Muslims in the eastern Georgian village of Samtatskaro from praying freely, human rights defenders have told Forum 18 News Service. The mob threatened to burn down the imam's home and drive him from the village. Guliko Nadirashvili, head of the village, "mentioned publicly that if the majority decides that there must not be a mosque in the village, that this is Christian land and the whole village is against Muslims' prayer, we won't allow them to pray," a human rights defender told Forum 18. Nadirashvili claimed to Forum 18 that Muslims have "no problems praying". The local police chief refused to discuss the violence and threats with Forum 18 and the Interior Ministry in the capital Tbilisi was unable to say if anyone has been prosecuted over this and two similar mob attacks on Muslims in late 2012.

ABKHAZIA: "We'll kick out anyone"

The internationally unrecognised entity of Abkhazia has defended its expulsion in early April of three Georgian Orthodox monks and four nuns. Defence Minister Merab Kishmaria told Forum 18 News Service that "I took the decision to expel them. We'll kick out anyone who prevents the population of Abkhazia from living calmly." Asked how the monks and nuns in the remote Upper Kodori Gorge had disturbed the population, he responded: "They don't recognise our independent state or our Orthodox leader Fr Vissarion." The monastery has functioned in the Upper Kodori Gorge from the early 1990s, when the area was under the control of Georgian authorities. After fighting in August 2008, the area came under the control of the Abkhaz authorities. The monks and nuns were expelled after they resisted pressure from Fr Vissarion Aplia - who heads the canonically unrecognised Abkhaz Orthodox Church - to leave the Georgian Orthodox Church and join the group he controls. Deputy Foreign Minister Maxim Gvinjia defended the expulsions, insisting to Forum 18 that the Abkhaz Orthodox Church can prevent any religious community it does not like from functioning. The local Georgian Orthodox community has thus been denied access to any clergy just before the major Orthodox feast of Easter.

Two monasteries of Georgian Orthodox monks and nuns in the Upper Kodori Gorge, captured by Abkhaz forces from Georgian forces in mid-August, are being pressured by the Abkhaz Orthodox Church to change their jurisdiction. "They must submit to the authority of our Church or leave Abkhazia," the head of the Abkhaz Orthodox Church, Fr Vissarion Aplia, who visited the monks and nuns within days of the fighting, told Forum 18 News Service. Asked who had given him the right to pressure members of a different religious jurisdiction to submit to his authority, Fr Aplia responded angrily: "It's not your business. It's our territory." Abkhaz Deputy Foreign Minister Maxim Gvinjia backs the right of the Abkhaz Church to enforce its will on the monks and nuns. "Of course we won't defend their rights, given the context of current developments," he told Forum 18. "Abkhazia is a Christian Orthodox country and the Abkhaz Orthodox Church is the main church." Since the expulsion of a Georgian Orthodox priest in April, the two monasteries are the only remaining Georgian Orthodox institutions left in Abkhazia.

The internationally unrecognised entity of Abkhazia has expelled a Georgian Orthodox priest, Fr Pimen Kardava, after a "special decree" of the canonically unrecognised Abkhaz Orthodox Church. Independent sources who preferred not to be identified have told Forum 18 News Service that the expulsion was carried out by the entity's SSS security police. Fr Kardava's expulsion, just before the Orthodox celebration of Easter, leaves the entity's Georgian Orthodox believers without any priests. Yuri Ashuba, head of the SSS security police, declined to speak to Forum 18, but a subordinate stated that "You should speak to Fr Vissarion Aplia of the Abkhaz Orthodox Church." He admitted that Fr Aplia is not a state official but would not say why he was the appropriate person to answer questions. The Abkhaz diocesan administration's telephone was not answered. Also, Batal Kobakhia, chair of the entity's parliamentary Human Rights Committee, told Forum 18 that a Religion Law is being prepared.

GEORGIA: Little justice yet for victims

Patman Tabagari lost her sight in one eye after being kicked in the head by a mob, led by a Georgian Old Calendarist priest, that stormed a Jehovah's Witness meeting. Yet in the cases of this and more than 800 other attacks on religious minorities, Forum 18 News Service has found that their attackers have almost never faced justice. Only nine perpetrators have been tried and found guilty, and only two of them have received prison sentences. Georgian politicians, officials and the Georgian Orthodox Patriarchate seem to try to ignore the problem. But Baptist Bishop Malkhaz Songulashvili argues that "the crimes committed must be identified, condemned and only then can they be forgiven. If we forgive without identifying the crimes there is no clarity on what is being forgiven. We will only create an atmosphere where these crimes have a longer life." Manuchar Tsimintia, a lawyer for the Jehovah's Witnesses, agreed, telling Forum 18 that "if there is no punishment for all those people who conducted aggression against religious minorities, there could be a return to the old times."